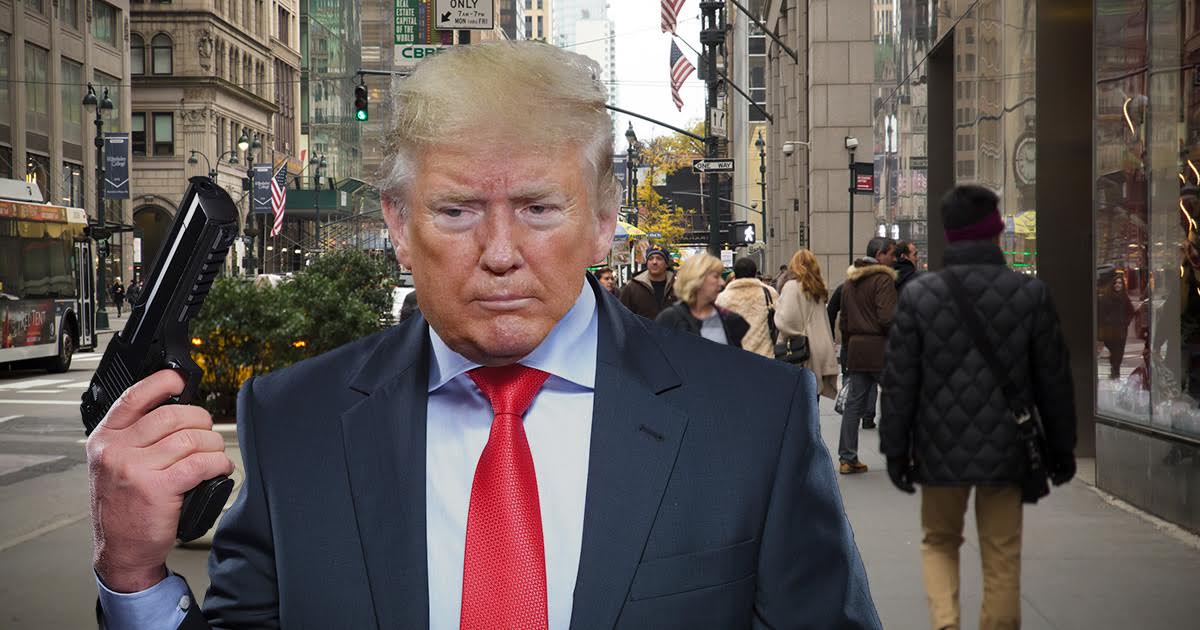 “These people love me, and I’m here to prove just how much,” explained the gun-wielding leader of the free world in front of Trump Plaza. “I said I could do it, right here in the middle of the street — I said it before the last election, and look what happened: they cheered so loud and voted me into office. This will be the greatest shooting spree in American history — better than any mass casualty event in the history of the country. Very good for our economy. Today, I Make America Great Again!”

Despite appearing more energetic and agile since his COVID-19 diagnosis last month, many in Trump’s own Cabinet frantically tried to discourage him.

“I did my best, but I couldn’t stop him from walking out here,” a tearful Jared Kushner sobbed. “I tried to tell him that murder won’t help, but he wouldn’t listen — he had that ‘I’m going to kiss my adult daughter on the lips’ look in his eyes. I know it all too well. You do not get in front of Daddy when that happens.”

NYPD officers were hesitant to do anything to help millions of panicked New Yorkers.

“This really is an interesting situation we have here,” reported veteran officer Devin Schwortzki. “You see, if he wasn’t white, we’d have just shot him the second we arrived on the scene. But not only is this guy white, he’s the freakin’ President! Honestly, I don’t know if I’m allowed to even tackle him; I’m pretty sure it’s illegal for me to even suggest it. Plus, I already voted for the man, so I feel a moral obligation to just back off and allow him to continue doing great work for this country.”

At press time, Trump’s daughter Ivanka arrived on the scene wearing a short skirt, distracting her father and luring him back to Trump Plaza.