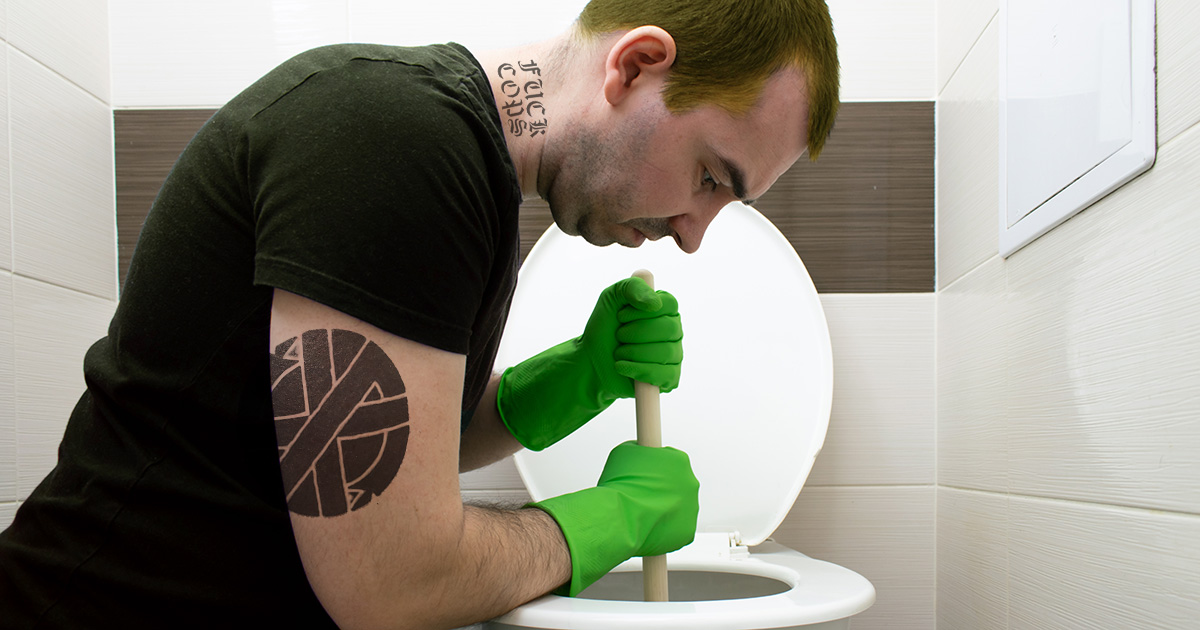 PORTLAND, Ore. — Local crust punk Julian “The Stain” Rainer stunned a group of friends by somehow clogging a perfectly good toilet merely after urinating in it, sources who didn’t even think that was possible confirmed.

“Hoo boy. This is like the third time that’s happened this week,” said Rainer before attempting to shift blame to the toilet’s low-flow flushing system. “I should probably get my piss checked out, but I much prefer the old fashioned way of resolving bladder issues by hoping they just sort of go away on their own. I mean, I tried not drinking water for a few days to reset my system, but that only seemed to make my pee more clog-inducing. What’s even weirder is that I haven’t shit in weeks. It’s like my body combined both urination and excrement functions into one substance that is released every few days. I’m not too worried about it, though.”

Friends of Rainer reported never having seen anything like this before.

“He was literally peeing for four consecutive minutes before ultimately clogging the can, like full-blown piss stream the whole time,” said longtime pal Jenn Wheeper, owner of the toilet in question. “What’s worse is he played it off like the toilet wasn’t dramatically overflowing as he walked out of my bathroom. He said it was like that when he walked in, which is highly unlikely considering I heard him frantically fiddling with the upper tank portion while attempting to flush the toilet several more times in hopes it would miraculously unclog itself. I mean, he could’ve just used the plunger and no one would’ve known. From now on, that guy’s only allowed to piss outside on the fence like the rest of my guests.”

Experts who were also stunned by the news weighed in on the phenomenon.

“What we have here is a classic case of dehydration, UTI, or an STD. One of those,” said doctor Clara Danesfield. “At least I think so, anyway. Who knows. As medically trained professionals, we’re mostly taking guesses at these diagnoses. But seriously, I’ve never seen anything like this before. Except one patient whose urine sample inexplicably contained dangerous levels of gasoline and raccoon fur. I must not have been paying attention when they went over that one in medical school.”

At press time, Rainer was kicked out of the local gas station for clogging a urinal, which the local plumber suggested was structurally impossible to do to one of those.