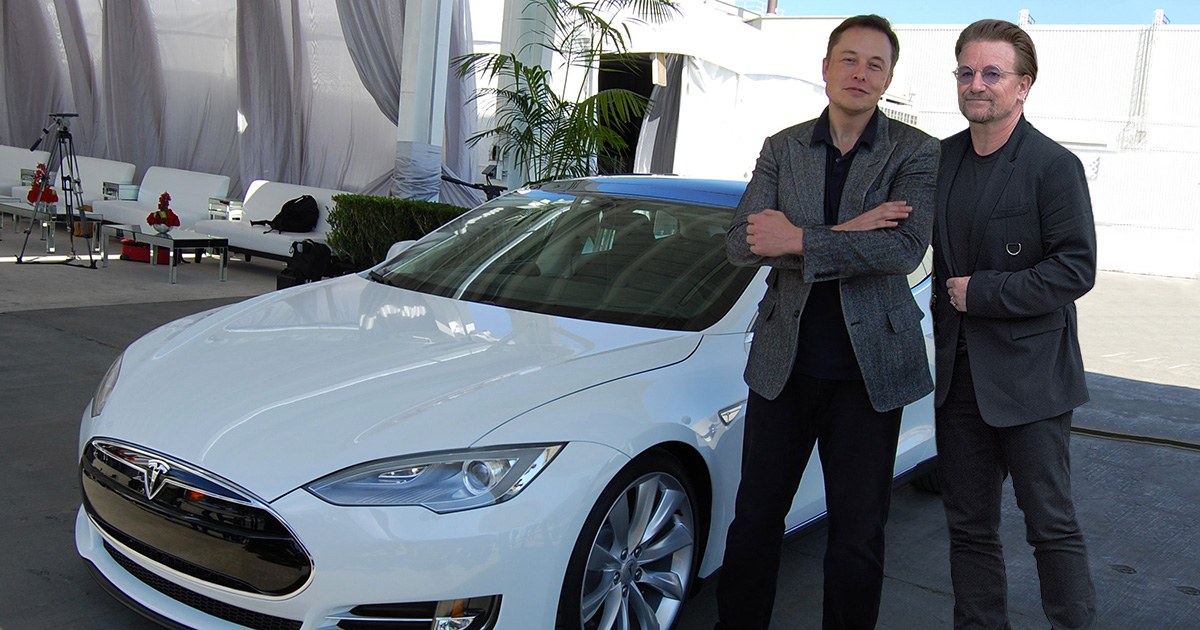 The Tesla Applause is set to hit the market later this year.

“They say, ‘Great minds think alike,’” Musk proclaimed in his opening remarks during their crowded press conference. “And, my friends — you’re looking at two of the greatest minds around. What we’ve done with this car will change the way you drive forever.”

“The world will look back on this car as the first one to truly make a difference,” Bono said passionately. “It’s time for a car that boldly makes a statement: the future is here, and we’re moving forward, with or without you.”

“Did you catch that reference?” Bono then asked. “Pretty sweet, huh?”

“We’re not asking for a ‘thank you,’ but it wouldn’t be out of order at this time,” Musk added, pausing for a brief smattering of applause.

While the first cars won’t hit dealerships until later this year, a few lucky fans were allowed to test drive a prototype, with mixed results.

“Don’t get me wrong, it’s a really smooth ride,” said tester Natalie Eisner, who drove the car for 30 minutes. “But the dash screen chimes in every five minutes to tell you how much gas you’re saving, and Bono himself slapped my hand away when I tried to turn it off. Plus, there’s no radio — it’s just U2’s Greatest Hits on repeat, with a Grimes song thrown in every once in a while. At one point, Grimes was playing over a U2 song, and the dash display just said ‘Yas, yas, yas!’”

As the press conference came to a close, Bono and Musk reiterated their commitment to using technology to create a better world with another stunning announcement.

“At this very moment, we are donating an Applause to Africa… by dropping it from fucking space!” Musk shouted excitedly, doing a weird little hop and fist jab.

Witnesses confirmed that, when asked where in Africa the car would land, or what an impoverished nation would do with a $200,000 car, Musk and Bono were already speeding towards the sunset, cackling maniacally.