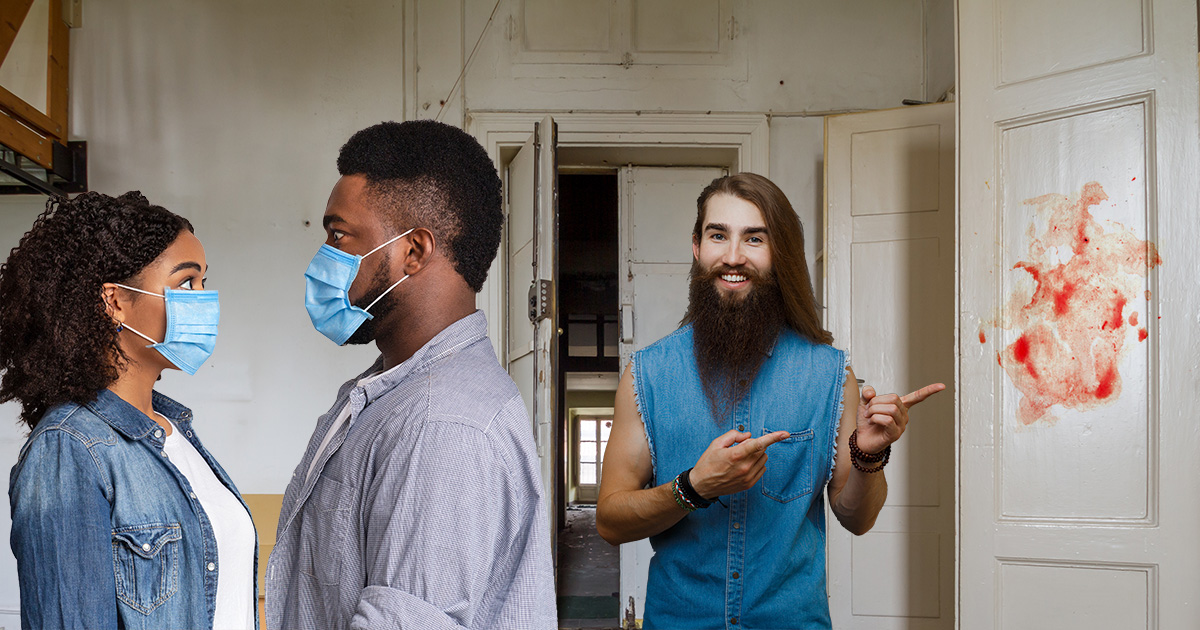 “It’s all Shredder could talk about while we were putting out the canapes,” says Vanessa Albright, Dukowski’s assistant and designated driver. “He’s known all over town for his gregarious personality, and his penchant for describing in Victorian surgery manual levels of detail the atrocities that have happened in his listings. This one specifically, he’s going into true-crime podcast level of detail when showing the house. He wanted to pull up the carpet so buyers could see how some of the blood soaked into the floorboards, but thankfully I was able to talk him out of that.”

Dukowski himself couldn’t even contain his excitement when he found out about the house’s past.

“This property has it all: a pool, bay windows, fruit trees, and a serial killer’s murder spree in the living room,” said Dukowski while practicing his pitch before the buyers arrive. “If you look closely at the indentations in the carpeting, you can still see the drag marks the husband’s intestines left as he crawled across the floor. Plus, you can get it for a song, because it’s been sitting on the market for 16 years. Not to mention Suffocation wrote a song about these murders, so this place is basically a landmark. And there’s a fucking three car garage! That shit is crazy.”

“Property values across the neighborhood went to hell after that family was killed by a psycho with a machete,” said Alfonso LaPierre, Realtors of Santa Clara County President. “You wouldn’t believe the kind of damage a severed head in a mailbox does to a home’s curb appeal. [Dukowski] was able to restore the home to its tasteful, pre-massacre glory with the marble countertops and wood panelling, while leaving the original blood stains.”

While Dukowski’s death metal approach to real estate is unconventional, his peers cannot deny its efficacy. His new park bench ad touts: “Once you go aggro, you’ll go into escrow.”