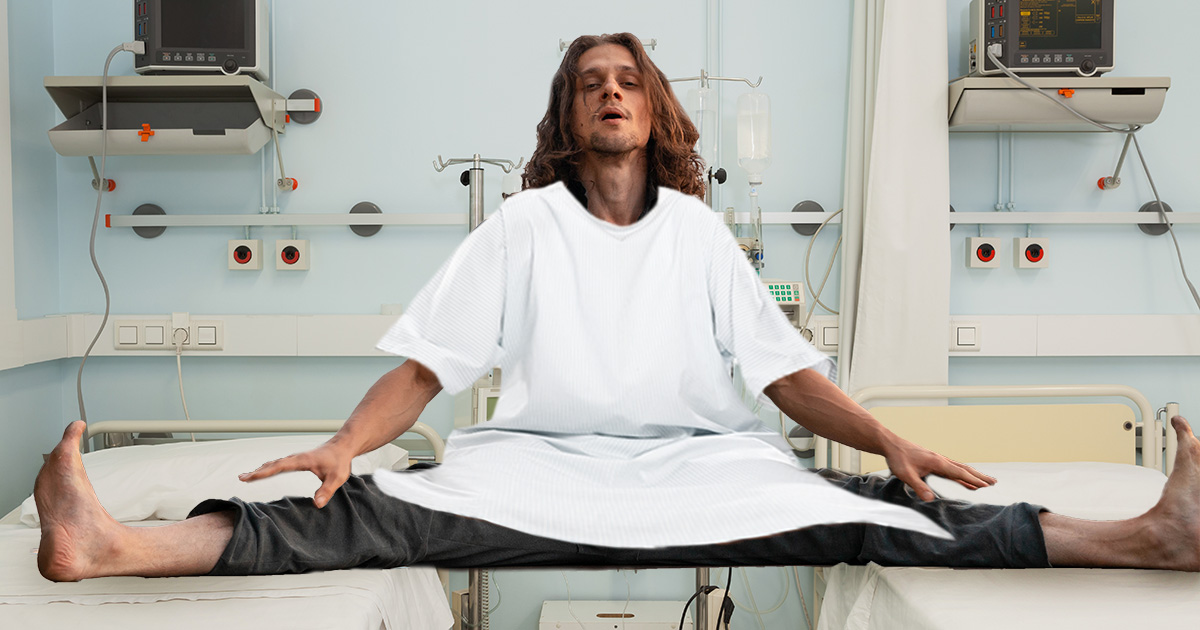 BOISE, Idaho — A man suffering from COVID-19 after refusing a vaccination drew ire from other patients by spreading his legs across two ICU beds, hospital staff confirmed.

“They’ve got me hooked up to all these fancy machines, how the hell am I supposed to stay comfortably confined to one bed? I need to spread out, let my body relax. This is the same body that beat syphilis twice; I think I can handle a flu,” said Darren McAvoy as he struggled to breathe. “First I have to close my legs for some pregnant lady or old person on the bus, now my nuts have to be touching my thigh while I’m on a ventilator? These assholes just get off on restricting my freedoms.”

Hospital staff pleaded with McAvoy to make room for additional patients to no avail.

“I admitted Mr. McAvoy two days ago amidst a flood of other people suffering from late stage COVID, and the second I turned my back he hooked his leg into another bed and refused to relinquish it. I tried to tell him that we have patients lying in the hallway, but he wouldn’t budge,” said Dr. Martin Sinclair. “I’ve met plenty of patients with no shame or decency, but for all his rantings about preferring ‘dangerous freedoms to tyrannical peace,’ he sure is adamant about having as many pillows as possible.”

McAvoy’s insurance provider was alarmed, but not surprised, after the hospital’s billing staff sent in his claim.

“While Mr. McAvoy met his deductible within the first three weeks of the year, his policy does not cover literally anything he is doing. Not only did his refusal to be vaccinated disqualify him from any coverage for his stay, but by taking up two beds he actually owes us enough money to buy a small island,“ said Allina Health representative Susan Smith. “As much as we’d love to charge him for occupying multiple beds, the hospital’s regulations state that he can either close his legs or move behind a dumpster in the parking lot.”

At press time, McAvoy’s family was informed that he had passed away, and that his last will and testament insisted that women who walk by his grave smile once in a while.