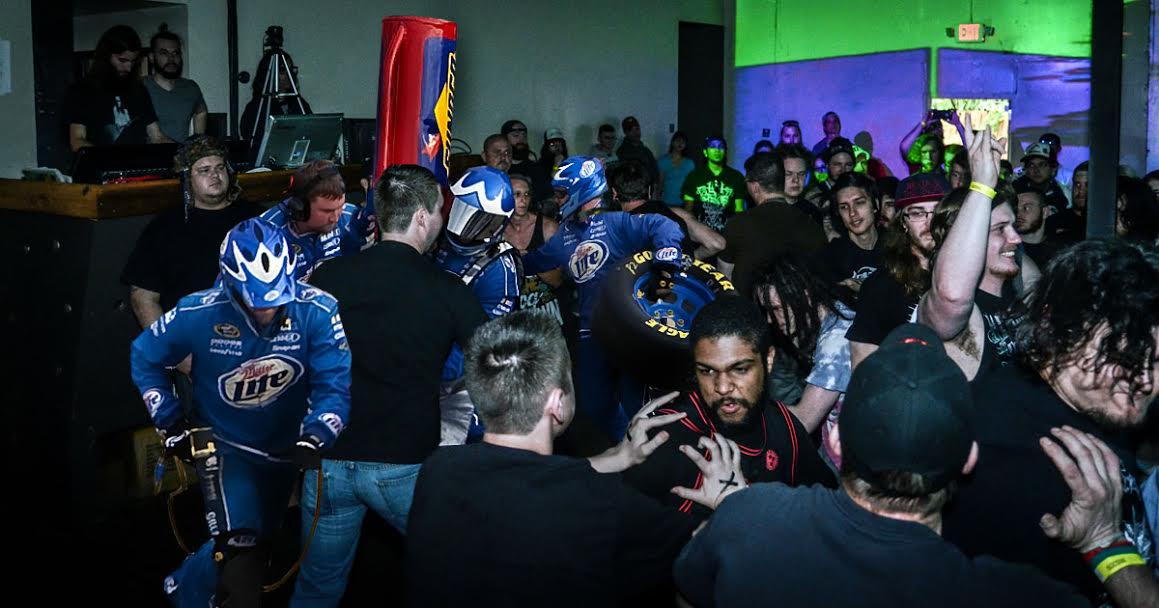 “They came out of nowhere,” said Dennis Hoffstadt, the youngster whose limb was injured by the rambunctious crowd. “One minute, I felt something twist and pop in my leg; the next, I’m on a gurney, surrounded by guys taking off my shoes and covering me in band-aids. As soon as they finished, I felt better than before. I really started fucking shit up during the second half of the show.”

The pit crew, consisting mainly of retired firefighters and EMTs, prepares for the worst each week by gathering in a member’s garage to practice putting splints and bandages around a CPR dummy wearing a “Wiccans” T-shirt.

“This one was a complete blowout — I didn’t know if we were going to be able to get him back on track. But we threw on some new shoes and realigned his knee, and he was good to go,” said Al Morgan, the Denton pit crew chief. “Our training is pretty rigorous. My guys go through a lot of drills, ranging from grindcore to ska, to make sure we’re ready for anyone caught in the lane.”

Onlookers were impressed with the pit crew’s efficiency and attention-to-detail.

“Those guys are heros, man,” says Abbie Zucker, another teen nearby when Hoffstadt went down. “They put themselves in the line of fire and don’t ask anything in return. If this wasn’t a straight edge show, I’m sure they’d be showered in champagne after this triumph.”

Although the humble pit crew eschews recognition, a source at Guyer High School noted a special, commemorative Community Pasta Dinner is in the works to honor the often-overlooked crew.

“Honestly, there’s no need to thank us,” said Morgan, gazing out at the empty dance floor once teeming with adolescents, now littered with broken glasses and the occasional stray Vans sneaker. “It’s just another day on the job.”