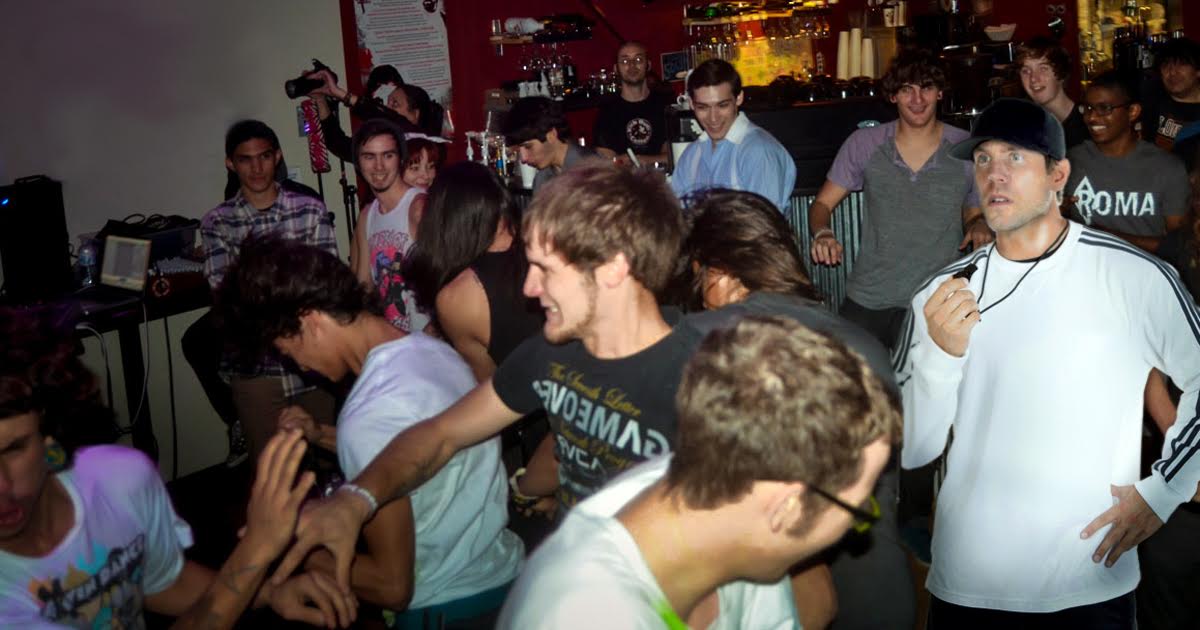 SACRAMENTO, Calif. — Former all-star mosh pitter Craig Jones gesticulated wildly from the pit sidelines during Friday night’s show at the Empire, according to witnesses, trying unsuccessfully to coach his timid son back into the pit.

“What the hell is he doing, standing against the wall? I don’t care if he got kicked in the head. If he doesn’t get in there and deck some kid right now, you can bet your ass he’ll be sleeping on the lawn tonight,” said Jones of his 14-year old son, Danny. “He’s better than this, he really is. If he’s anything like his old man, he’ll be smashing skulls in no time.”

With the rise of competitive all-ages moshing, many formerly cool parents, living vicariously through their children, are expecting more of their kids than ever before. Parents now have a wide variety of coaching options, from private, after school courses, to father/son and mother/daughter classes for ages 3 and up. Some parents, like Jones, choose a more active, in-the-field role.

“I used to be feared in the pit back in my day. I can tell you, it’s not enough to just show up,” said Jones. “Danny’s on a very strict schedule. Right now, we’re covering the skanking and pogoing fundamentals. He needs to be well rounde — to be able to handle anything the pit throws his way. I’ve rigged up a system of mechanical dummies in the back yard for him to practice with.”

Despite his father’s insistence on practicing moshing, young Danny does not see aggressive dance moves at sparsely attended shows in his future.

“This really isn’t my thing,” Danny admitted, hiding behind the largest man on the edge of the pit. “Honestly, I kind of just want to play sports. I love football. It’d be so fun to just play some catch with my dad. But he won’t let me ‘waste my time on jock shit.’”

As competition in the pit intensifies, data shows mosh-induced injuries have only increased — a fact the elder Jones has accepted.

“Yeah, Danny lost a tooth at a Power Trip show last week, but that comes with the territory,” said Jones. “I’m going to have his mother show him some new crowd killing techniques this week. Hopefully that’ll keep him safe while severely injuring people just minding their own business.”