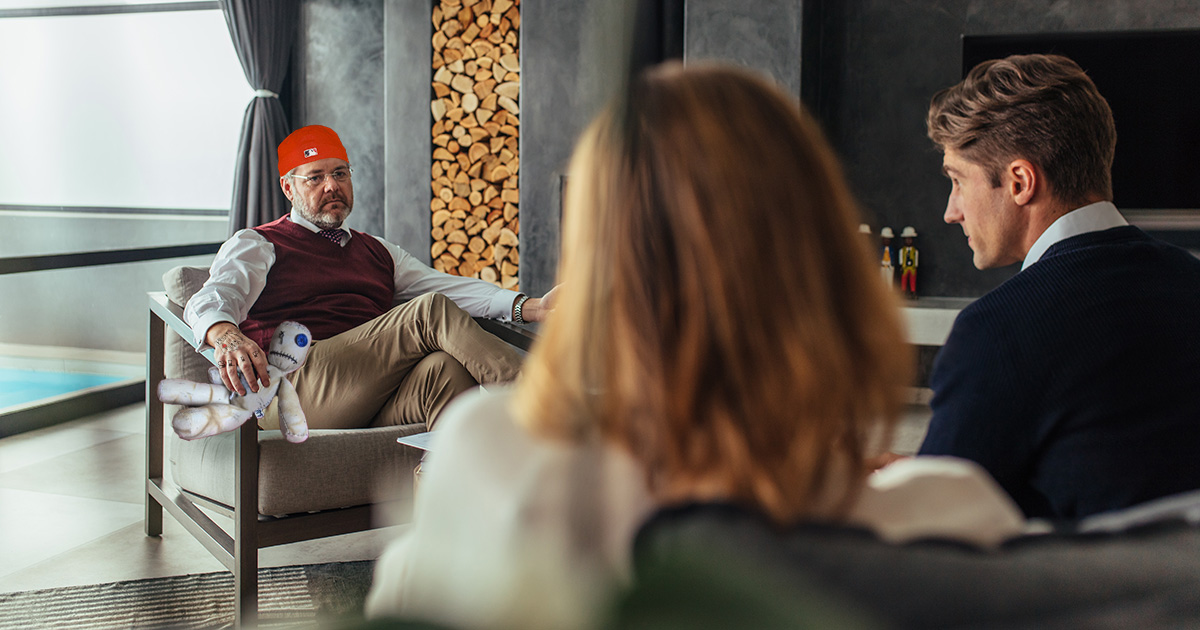 RENO, Nev. — Couples therapy specialist and nu metal enthusiast Dr. Stephen Hoffman has found it’s best not to take sides in an argument and will not get caught up in the he said she said bullshit, according to sources who can see where he’s coming from.

“I found that when it comes to relationships, it’s best to look at things from both points of view rather than to just take what one person says as a completion of the story. Sometimes your partner seems like the biggest jagoff in the world, but that’s when you gotta remember it just might be one of those days,” Dr. Hoffman has said to many clients. “We’ve all had moments where we’ve felt like shit and we’ve been treated like shit, and it’s up to us to take responsibility for our feelings and ourselves if we want to create more intimacy in the long run.”

Two of Dr. Hoffman’s patients, Jeffrey and Felicity McGuire, found his practices to be very helpful.

“He told me that sometimes you feel like everything sucks, everybody sucks and you don’t know why but you justify your actions. Dr. Hoffman helped me realize that I was acting like a jerk toward my wife and that I was rationalizing the actions in my head to make myself be seen as the victim,” Jeffrey McGuire said. “He told me to not say something I’ll regret, to make sure not to let shit slip or I’ll be left with nothing but a fat lip. I took those words to heart and now my wife and I have never been happier.”

Not everyone has left happy with Dr. Hoffman’s techniques, including Frank and Deanna Becker, whose 13-year relationship ended in divorce following three sessions with the doctor.

“Dr. Hoffman claimed that I was ‘all about the nookie,’ whatever that means. He said I was dwellin’ on the past and that it was burning on my brain hot, and told my wife that when it came to me, ‘nothing was gonna change and you can go away,’” Frank Becker complained. “Was he right that maybe she just made a mistake and I should give her a break? Maybe. But as far as I’m concerned, that guy can take his advice and stick it up his… yeah. You know.”

At press time Dr. Hoffman was organizing family therapy workshops which he plans to include as part of his ‘Family Values’ tour, scheduled to take place next year.