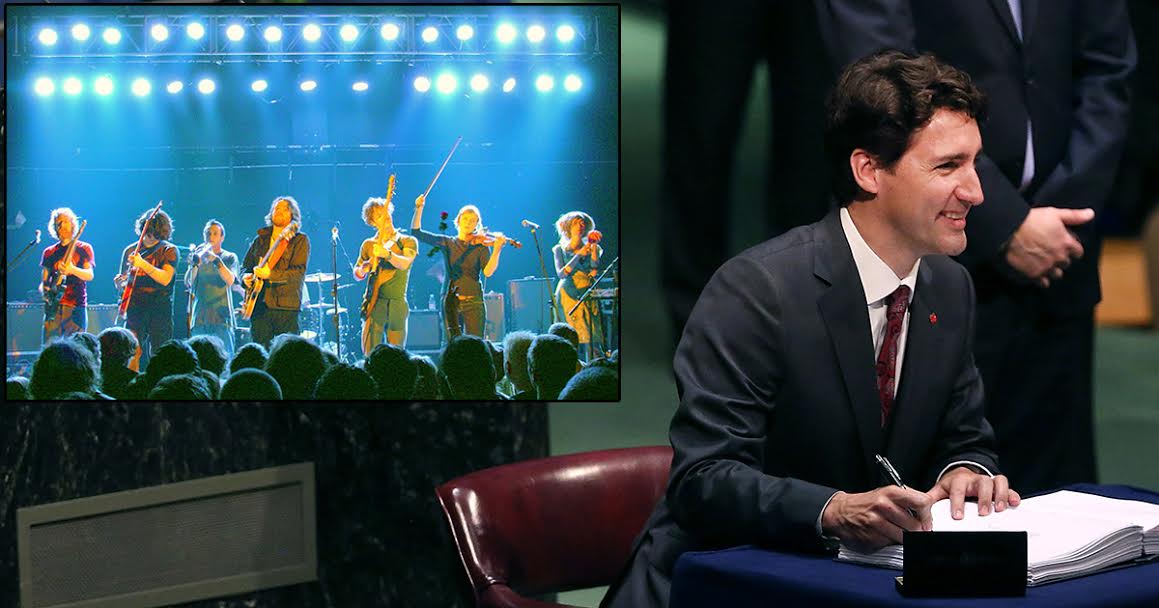 OTTAWA, Ontario — The Canadian Parliament passed a law yesterday requiring all citizens over the age of 18 to spend two years serving as a touring member of the indie rock collective Broken Social Scene, government sources confirmed.

“We believe mandatory band service will yield tremendous economic prosperity and help in exporting Canadian culture to the international community,” said Canadian Prime Minister Justin “the Canuck Hunk” Trudeau. “It’s time to give back, Canada. Ask yourself this: what can you do for Broken Social Scene?”

While there will be some logistical issues that need to be worked out, Trudeau is hopeful the new law will be a resounding success for the people of Canada.

“I’m aware most people will want to play lead guitar. But, unfortunately, at least a few are going to have to sacrifice and play bass, or tambourine, or something lame like that,” said Trudeau. “Thankfully, Broken Social Scene also has room for people that just sort of dance on stage, which will help our citizens who can’t play an instrument satisfy their requirement.”

Those who served prior to enactment of the BSS Conscription had mostly positive things to say about their experience.

“I really enjoyed my time [in Broken Social Scene]. I got to see the world and a lot of mid-sized rock venues. I also met Feist, very briefly. She’s cool,” said former member Brad Ware. “I thought about re-enlisting after my mandatory service, but life got in the way, and I ended up being the tour manager for Metric.”

Although in the minority, some Canadians are taking issue with the mandatory service.

“Excuse my language here, but I’m mighty peeved,” said self-described metalhead Gordie Matthews. “To each his own, you know? But I’ve got no time for indie rock music. Ol’ Gordie here needs to headbang.”

Parliament, however, accounting for other musical tastes, has devised a contingency plan involving several other Canadian bands in need of new members.

“Obviously, the music of Broken Social Scene is not for everyone, but there are other ways to serve Canada,” Trudeau said. “For instance, if metal is your thing, Montreal’s Cryptopsy is actively searching for a sixth rhythm guitarist. Nickelback is also looking for new members, but, unfortunately, no one in all of Canada has expressed any interest in joining them.”

Love reading The Hard Times? Well then you will love wearing one of our shirts. Click below: