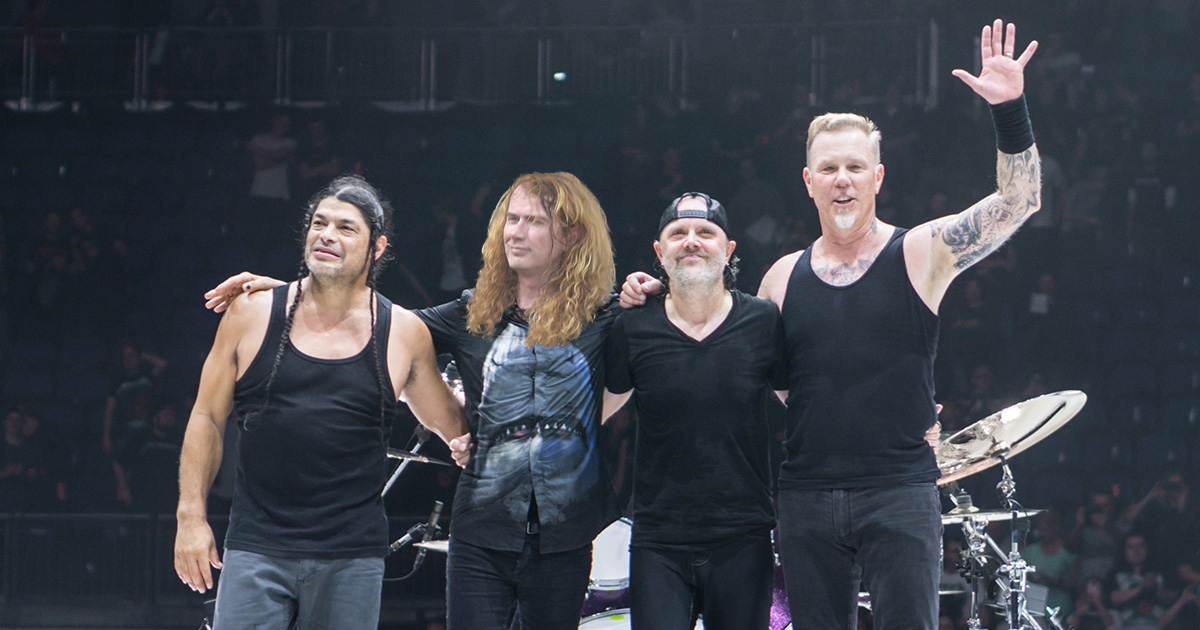 LOS ANGELES — A flurry of legendary thrash bands returned to their original form today after guitarist Dave Mustaine signed a contract to rejoin Metallica 36 years after being kicked out of the group, multiple sources scrambling to make sense of everything confirmed.

“It started just like any of our other projects do: we were running short on clams, and needed a quick and easy way to make a boatload of buckaroos without any actual work,” said James Hetfield, guitarist and singer of Grammy Award-winning metal band Metallica. “We are thrilled for the future of Metallica and all the dead prezzies we’ll reap from this reunion. Fans are just going to gobble this up and be like, ‘Please, please, Metallica! Take all the money I get from working in an auto body shop,’ or wherever all these rubes work.”

Immediately after Mustaine signed to confirm a one-time studio album and tour with the supergroup now known as “Megatallica,” the room filled with a blinding flash of light, blasting now-former Metallica guitarist Kirk Hammett out of the room.

“At first, I thought Lars farted again… but this had slightly less ‘oomf’ to it than his usual rippers,” said Hammett, who had been in Metallica since 1983. “I was warped into a vortex and crashed into the middle of my old band Exodus’ rehearsal.” Hammett sighed, “I was actually psyched. When Mustaine came in to sign those papers, I wanted to do anything to get out of the room. That dude’s a dick. I don’t know how the hell the World Taekwondo Federation stood the guy enough to give him a black belt, but for some fuckin’ reason, he has one.”

Reports note the chain-reaction vortex thrust Gary Holt, the most veteran member of Exodus, out of the rehearsal and back into thrash metal band Slayer’s practice space, which he frequents every other Tuesday.

“It’s good to be here again,” said Holt upon his second entry into Slayer. “It just feels a little different… like, I think I remember being part of some other band. Ex-something? Ex-Machina? For the life of me, I can’t recall anything about it. Was she a robot?”

“I was taking a selfie, giving the devil-horns next to Jeff Hanneman’s grave,” said Slayer fan Joseph Miller. “The ground collapsed, and [Hanneman] crawled out, moaning about how hungover he was and asking for some Advil and a Coors Light. Then, he punched me in the gut and took the keys to my ’98 Mitsubishi Eclipse, peeling out of the cemetery screaming, ‘Kare-Bear! I’m coming!’ while frantically humming ‘World Painted Blood’ riffs.”

At press time, Iron Maiden’s Dave Murray was reportedly writing the same riff he has been for the last few decades and hoping nobody would notice.