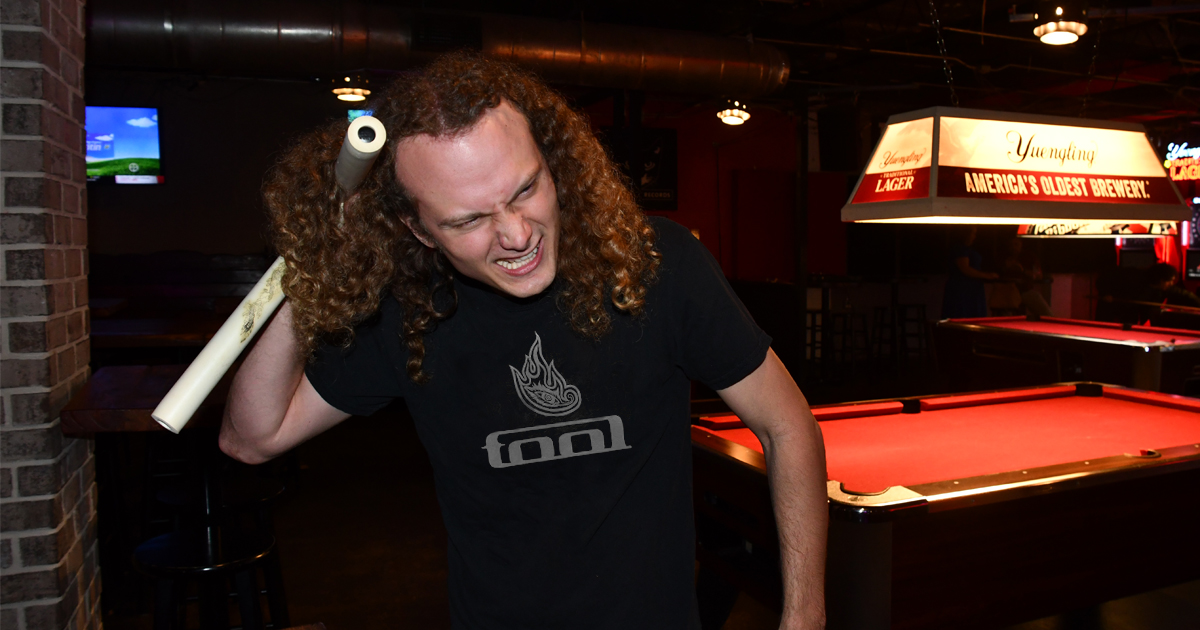 ST. LOUIS — Diehard Tool fan Glenn “Stinkfist” Miranda missed the band’s entire set after a brief display of martial arts resulted in him getting a pair of nunchucks tangled up in his ponytail, confirmed sources at last night’s Tool concert who also verified that it was by far the best part of the show.

“I can’t believe this shit!” bemoaned an angry Miranda. “They opened with ‘Hooker with a Penis’ and I was so pumped that I attempted some expert-level freestyle nunchaku during the breakdown. Next thing you know, it’s three hours later and I’m just getting the last knot undone as the encore wraps up. If you ask me, they owe me a refund because this wouldn’t have been a problem if security hadn’t made me leave my katana at the coat check.”

Tool frontman Maynard James Keenan witnessed Miranda’s plight from the stage and commented on it after the concert.

“Honestly, this happens all the time,” sighed Keenan as he sipped a fruit-forward cabernet while lashing himself a leather bullwhip. “We used to stop playing and get security over to help out every time these dudes would get their long, flowing Gen X man-locks knotted up, but it was making our sets even more interminable than they already are. I’ve said it before and I’ll say it again: if you’re coming to a Tool show, wear a fucking hairnet.”

Arthur Brown the stage manager at the Enterprise Center, which hosted last night’s Tool concert, led a crew of maintenance workers to pick up locks of hair that were ripped from heads.

“These Tool fans are a goddamn pain in the ass,” Brown noted after the event. “They dress like they’re going to a renaissance fair but they act like they’re at that rave from ‘The Matrix Reloaded.’ First, they all pregame in the parking lot drinking solo cups of mead, and then they try sneaking all sorts of crazy shit into the venue. You’d be amazed at what we confiscate from them. Well, needless to say, nunchucks are officially added to the list of items banned from Tool shows, along with Burmese pythons, vintage artillery cannons, and entire kegs of Mountain Dew Code Red.”

As of press time, Miranda was last seen in the pit at a Deftones show desperately trying to free his ponytail from his wallet chain.