Steampunk Beaten Up By Steamjock 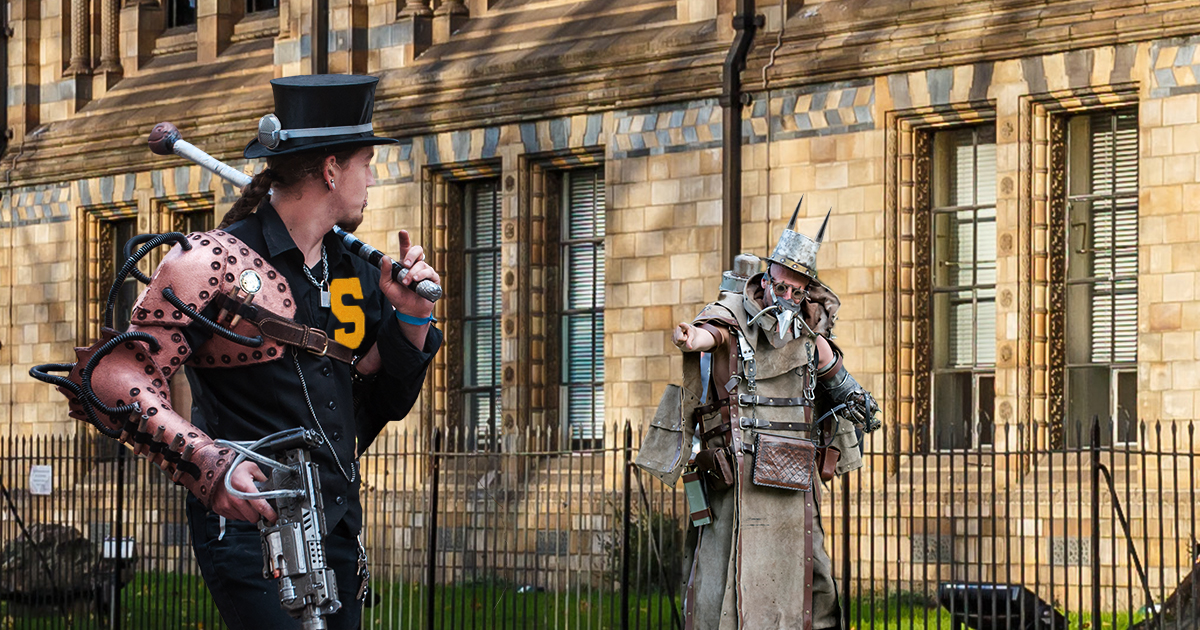 “He kept calling me ‘metalhead,’ trying to get a rise out of me. I just wanted him to slag off and let me go about my business,” said Franklin, gesturing at the metal spikes strapped to his head. “He’s such a gear-based douche-nozzle. Once I craft my copper-plated jacket, he won’t mess with me anymore.”

Gryphon, a star athlete distinguished by the white sun-goggles worn backwards on his top hat, insisted upon his innocence — despite his history of bullying.

“Look, it takes two to tango, OK? He didn’t even wear post-apocalyptic attire to the last homecoming dance, where I was crowned king. He disrespected me first,” said Gryphon. “That pounding was long overdue. He’s just lucky I didn’t have my prosthetic arm — it punches twice as hard as I can.”

According to school records, this was merely the latest incident of steambullying in Pincham’s long and storied history.

“Our students must remember that greatness at auto-polo or sprocket-cricket doesn’t give one the right to pick on others — even if their interests in gear-grinding music seems odd. Our student body should not be divided,” said Headmaster Nathan Olivander. “They need to realize that their differences are just clothing deep. Yes, one student wears black fishnets, and the other wears bright white robes with bronze buttons, but both have an obsession with a bygone era.”

However, others feel socioeconomic disparity is the greater problem at play.

“I see it every day: students floating in on flying weasels, laughing at their classmates riding the giant mechanical spiders… but there’s nothing I can do about it,” said tenured instructor Cynthia Popperton. “If I had it my way, the whole student body would be outfitted with state-of-the-art jetpacks, but that’s merely a dream.”

School officials were non-committal as to whether Gryphon will be expelled for his actions.

“We are in the thick of the auto-polo season, after all, so we can’t act too drastically at this time,” said Olivander.