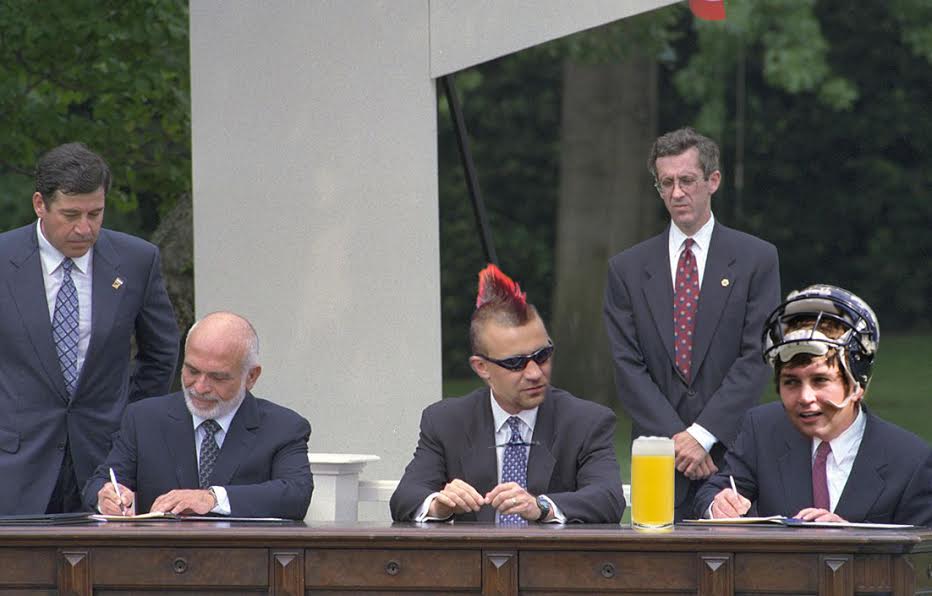 SAN FRANCISCO – One of America’s longest lasting wars has finally come to an end as punks and jocks finally settled their differences, united by their mutual love of beer.

For several decades, the culture gap between blacked-out punks and shit-faced jocks has been nearly impossible to bridge. The brutal conflict came to a sudden ceasefire Monday afternoon when two members of the local factions reached for the same case of beer; a moment which has since been dubbed “Case Closed 2015.”

“It was definitely a sight to see,” one eye witness, who wished to remain anonymous, said. “After realizing they had the same taste in beer, they also realized they came from the same suburb, went to the same schools, shared a similar income, and were basically the same exact person just in different clothes.”

“I would call it more than just a ‘peaceful coexistence,’” local punk Freddy “Scabs” Shaw said. “I mean, just this afternoon I held a beer bong for a guy in a Dave Matthews Band T-shirt. This feels like a moment that was destined to happen. I don’t believe in God – fuck the church, fuck your rules, anarchy, etc. etc. –  but nothing else could explain this. It was a moment that our grandchildren will still be talking about years from now.”

Local jock Jason Chalmers shares Shaw’s views. “I find the whole situation to be pretty funny, if you ask me,” Chalmers said as he opened a fresh Natural Ice. “We’ve previously shared common interests in things, like backwards trucker hats, sleeveless shirts, and white singers with deadlocks – but nothing has solidified our bond like beer!” Chalmers chortled, “The answer was in front of us the entire time!”

However, some detractors remain wary of the bond.

“Adam Goren [of Atom and his Package fame] tried to end this war several times in the early 2000s,” outspoken Punk Historian Tony Martin said. “It only resulted in him getting his ass kicked by both the jocks AND the punks!”

But the vast majority of the two parties remain optimistic of their future union.

“I just hope this means I can listen to Sublime again,” Shaw said.