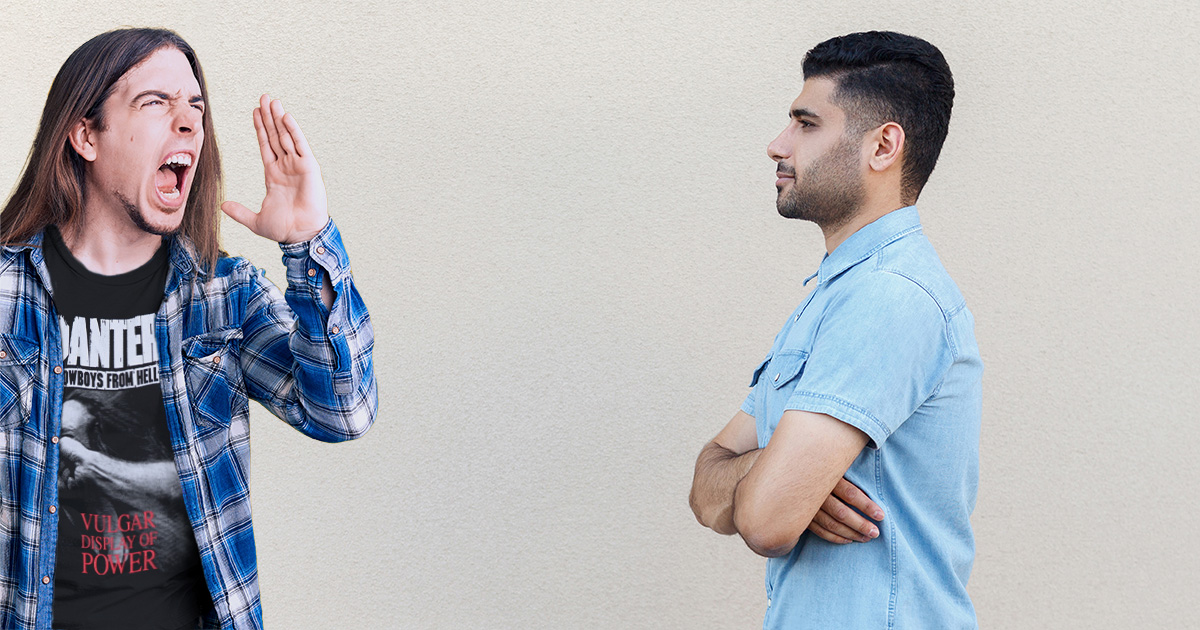 BIRMINGHAM, Ala. — Local Pantera fan Blane Butts referred to another customer at Ingles Supermarket as an “intellectual” yesterday in an apparent attempt to insult and undermine them, confused sources confirmed.

“I saw this nerd boy in a collared shirt and his dumb mask buying a newspaper, counting out exact change. I didn’t want to do it, but poindexters like him are a menace to society, and it is my patriotic duty to alarm the crowd and bust out the ‘I’ word. I bet he’s never tried fun shit like lighting off bottle rockets in your car, or meth you buy from a long haul trucker,” said Butts from inside the cab of his bumper-less truck. “We already have enough troubles here in our country — we don’t need any more that might be brought along by someone who takes time to think.”

The victim of Butts’ attempted public shaming, Jonathan McMeyers, is still undecided on whether to thank or resent the stank-breathed giant for pinpointing his “dangerous amount of wit.”

“I was just paying the cashier when he started yelling about how everyone needs to ‘back off’ because ‘we got an intellectual over here,’” said McMeyers, cleaning off Butts’ spit from his glasses. “I was a C student, I have an hourly job — the only things remotely intelligent about me are my Prius and the fact that I read the paper, mostly for the sports section. I’d like to say this is a first, but honestly, there are a ton of Pantera fans in this town and they all seem to be triggered by me. Luckily, they smoke, like, two packs a day, so it’s pretty easy to run away.”

Esteemed sociologist Dr. Henrietta Batiste, Ph.D. theorizes that Pantera fans tend to lash out due to a preternatural “fight or flight” reaction.

“Simply put, they’re scared of anyone who doesn’t know all the lyrics to ‘Walk’ by heart,” Dr. Batiste stated without any bias or judgement. “These Pantera fans keep a tight-knit clan from birth to the grave. Most of them are capable of complex behaviors like basic tool use, language, and lawnmower repair, but incapable of anything more complex, like arithmetic or prose. When they see those traits in action, they feel threatened. The type of tribalism in Pantera’s fanbase is a biological trait mostly seen in the early bipedal hominid Homo Erectus.”

Pantera fans all over Alabama are planning to march in protest of the “illegal intellectuals” flooding into their state.