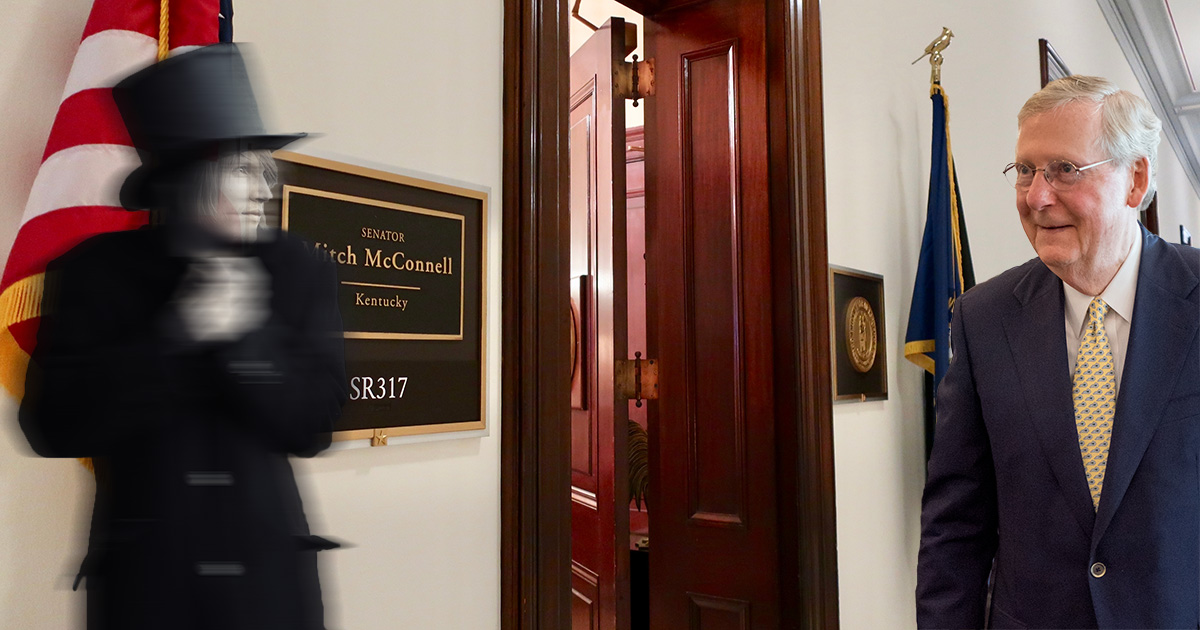 “I’ve haunted the Capitol ever since my death by dysentery in 1868 and in all that time, I’ve never gotten the creeps like this,” Hubbard said while hovering spectrally in the Old Supreme Court Chamber. “Sometimes I’ll be floating through the North Wing, deciding whether I want to ooze ectoplasm on a congressional aide, just for kicks. Then I’ll get this feeling like someone walked over my grave, which might actually be happening, and realize it’s just that spooky looking living scarecrow guy again. Just knowing he was in a room makes me shiver, and I don’t even have a corporeal body.”

“These halls have a lot of mysteries and I’ve seen my fair share of things no one can explain,” Shaver said while emptying a waste bin filled with drafts of blocked legislation for voter rights. “I’ve seen the statue of John C. Calhoun turn and look straight at me, I’ve seen Strom Thurmond speaking in tongues. But the scariest thing I’ve ever seen is when that Hubbard ghost appeared just after McConnell chewed out a junior senator for speaking to an MSNBC reporter without permission. That ghost looked like he’d died all over again.”

Dr. Alan Frenkle, a freelance paranormal researcher, had a warning for Hubbard.

“Many Class-D spectral entities like Mr. Hubbard are under the impression that they have nothing to fear, being post-death,” Dr. Frenkle explained while scanning the Capitol Crypt with a spectrometer. “There are, in fact, far more frightening things than death, like Senator McConnell’s weird discolored hand. We don’t know how that cursed hand could affect a spirit. Among researchers of the strange and unexplained like myself, McConnell has a reputation for unknown capabilities, legislatively and otherwise. Mr. Hubbard would do well to try to avoid getting on his radar.”

As of press time, Senator McConnell was finishing a heinous rite that would banish Hubbard’s ghost to an everlasting torment of committee meetings after learning the apparition was a Union soldier in the Civil War.