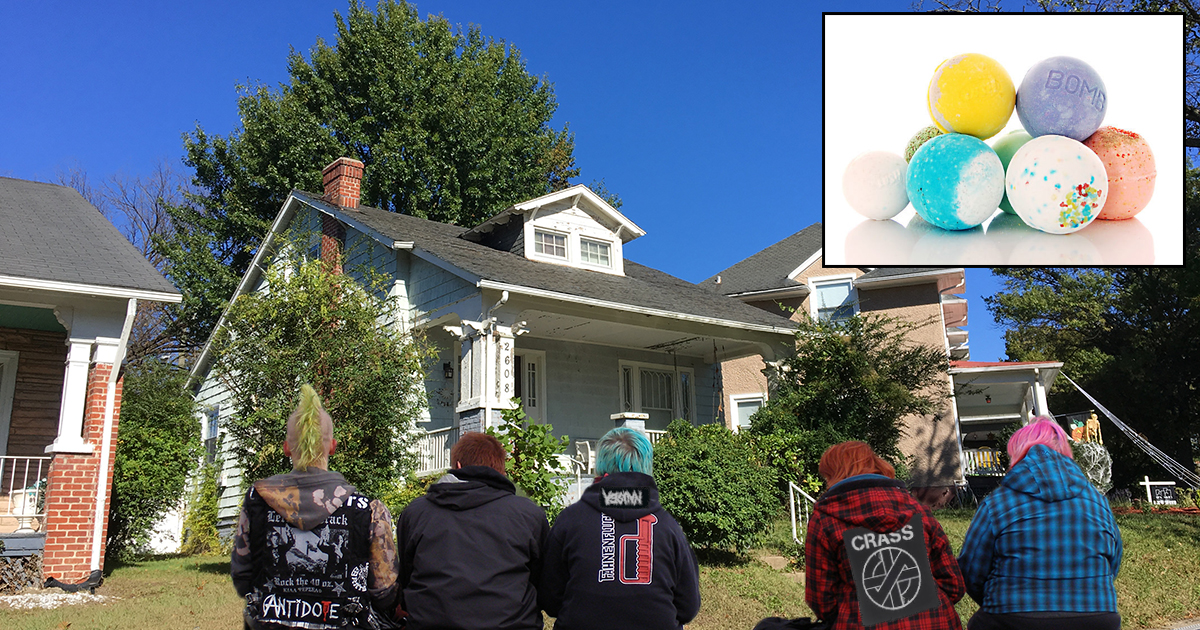 TACOMA, Wash. — The residents of the “Scab Lab” crust punk house were evacuated last night in response to an anonymous bath bomb threat, according to multiple unbathed sources.

“Josue’s the only one with a phone, so he got the call,” said Grace “DisGrace” Flanagan. “We all thought it was a joke at first, but when we found an active Glade plug-in in the living room, we realized we were all in a lot of trouble if we didn’t get out fast. I grabbed my dogs and went straight out to the sidewalk.”

“Before I could even ask, ‘Who dis,’ a distorted voice shouted at me that they were ‘gonna drown our filth in fragrant aromas’ and ‘cleanse our damned souls with 15 different moisturizing herbs,’” said Avery. “I’ve never been threatened by refreshing effervescence before… I’m still a little shaken up.”

Despite the Scab Lab’s commitment to anarchist politics, residents did not hesitate to contact local authorities.

“Everybody knows I hate the fucking pigs, man,” said resident Travis “Slime Time” Jameson. “But I’m not letting some sick terrorist with a Bath and Body Works gift certificate take my grime away from me, my dude. The last thing I need is a subtle lavender scent wafting off of my exfoliated skin.”

Residents say police response was swift, with a team of bath-bomb sniffing dogs dispatched. However, what the authorities found shocked even the most seasoned veterans of the force.

“In all my years on the job, I’ve never seen this kind of heavy ordinance,” said bomb disposal expert Sandra Reeves. “Three bath bombs, shaped like strawberries, packed with soothing aloe beads, a time-released vanilla foam, and enough jasmine to perfume a sultan’s palace. You can’t get this over the counter at a Lush — this is some custom shit.”

“Whoever did this was out for blood,” said Reeves. “The high quantities of volatile, freshening agents; the wide dispersal pattern; the potential for collateral damage: this could be anyone, from a neighbor who is sick of the smell, or a landlord looking to put the house back on the market. There’s no way to know.”

At press time, police were not allowing residents back into the house until the demolitions team finished sweeping for essential oil mines.

Looking for a real gift to give to that special punk in your life? Pick up a Hard Times shirt by clicking below: