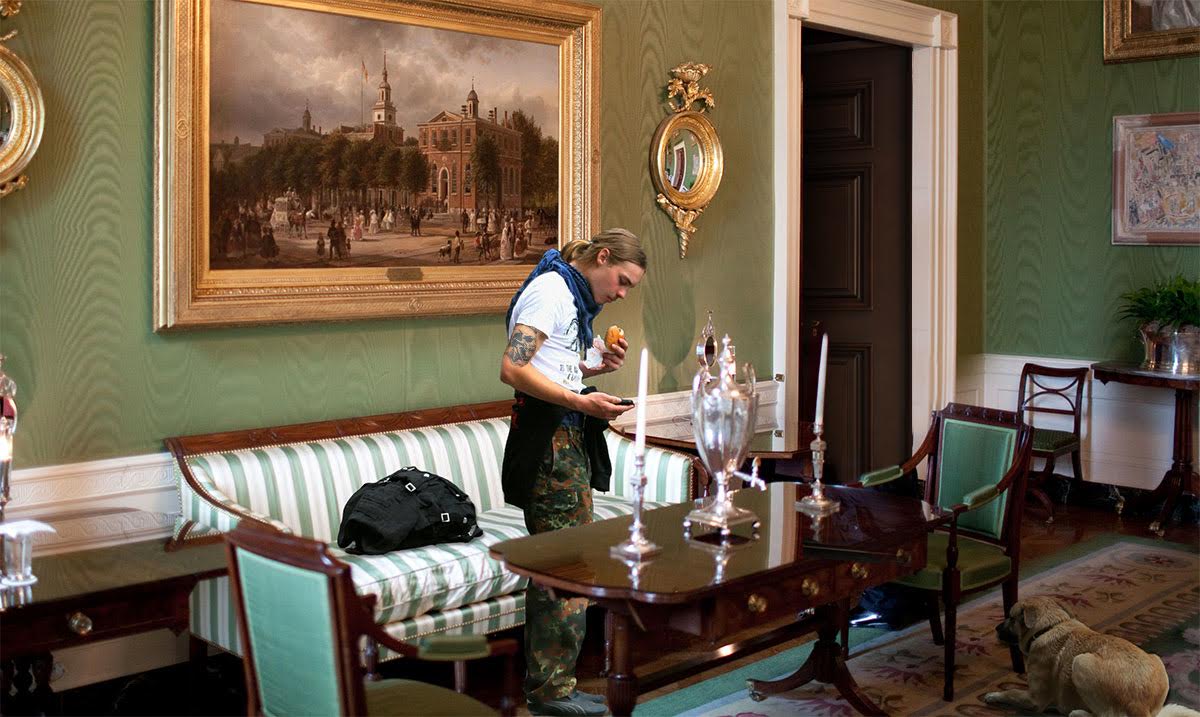 WASHINGTON – After spending the last 15 years squatting in the White House, a 35-year-old anarchist crust punk known only as “W∅rm” was sworn into office as the 45th President of the United States of America today.

The District’s “Adverse Possession” law grants that since W∅rm was able to successfully establish residence in the White House for fifteen consecutive years without being asked to leave, he is now the legal property owner.

W∅rm first entered the White House in early 2001 after being dared by a friend known only as “Toad,” a fellow crust punk and self-proclaimed anarchist.

“I dared him to spray-paint an anarchy symbol on the White House. W∅rm climbed the fence and that was the last time anyone saw him,” explained Toad. “Glad to hear he’s doing so well.”

Archived security footage confirmed W∅rm entered the building through an open first-floor window. A lot of blame has been placed on former President George W. Bush, considering W∅rm entered the premises during his first 100 days as President.

“You have to realize, this was a pre-9/11 world. Leaving windows open all willy-nilly was how we lived back then,” said former President Bush from his Texas ranch. “Son of a bitch really lived in there that long, huh? Not sure how I missed that. At least he became president on Obama’s watch.”

It was presumed by most of W∅rm’s peers that he had been assassinated by the “fascist secret police.” In truth, he has spent the last fifteen years crouched behind a dresser in the Lincoln Bedroom.

“That’s W∅rm for ya!” summarized Toad. “But if he runs the country like he ran his distro we are all fucked.”

W∅rm’s presence led some of the White House staff to believe that the Lincoln Bedroom was haunted. “The smell in that room was not of this world!” said a former maid. “Sometimes, late at night, I could hear the eerily faint sound of someone singing really early Against Me! songs.”

Surviving off of whatever he could scavenge from the garbage cans in the kitchen every night for the last fifteen years has finally paid off. President W∅rm addressed the nation today while standing in front of an upside down American flag.

“Please send any spare change you have to 1600 Pennsylvania Ave, Washington D.C.,” he said in prepared remarks. He then grabbed his acoustic guitar and started violently strumming the strings as he shouted, “Up the punks! In crust we trust!”