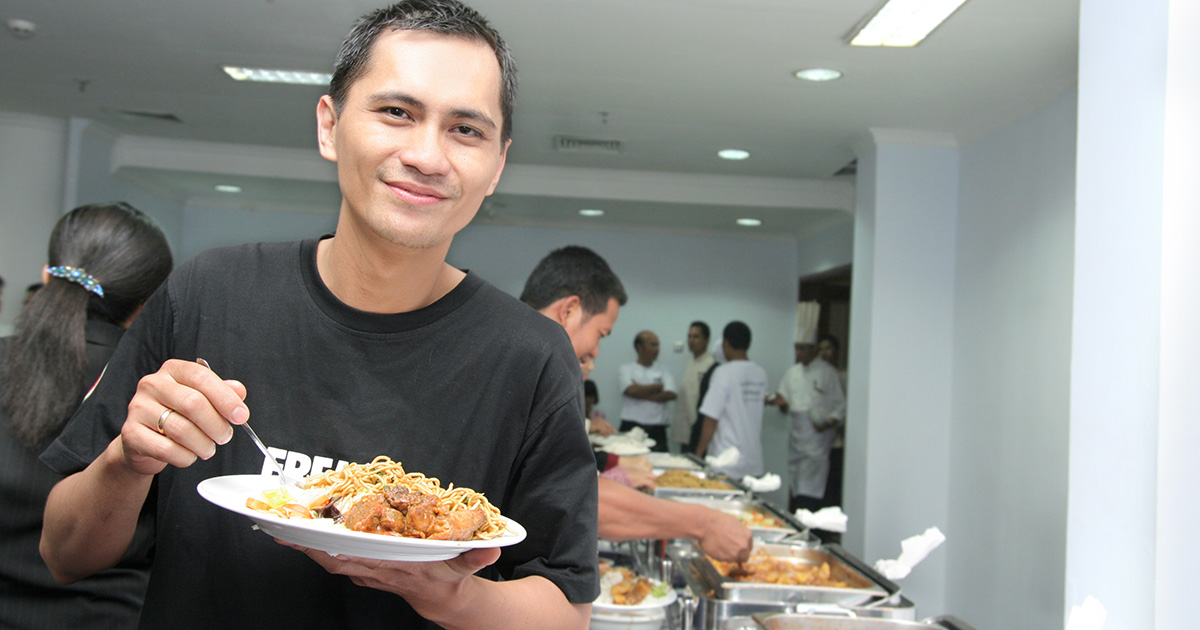 “I kind of don’t know what came over me,” Frakes said while grabbing a stack of plates and heading to a hot bar stocked with various meatloafs. “I heard myself say those words, but I’ll be honest, I don’t exactly know what it means. All I know is that I have a deep, uncontrollable compulsion to go to fucking town on that chafing dish of mashed potatoes over there, even though I know they’re going to be somehow both gluey and dry. And then after that, those fried ravioli are going down.”

“I’m not entirely certain how I got here, though,” Frakes added, slopping gravy over his plate and hand. “I hope my car is outside.”

Fellow customer Karla Zielinski commented that Frakes had an unsettling energy, even for a buffet restaurant.

“That guy over there is giving off some real funny vibes,” Zielinski said, loading up from the “Manager’s Choice” pie and cake table. “He’s been pacing like a wild animal, just filling plate after plate from the pasta bar, then the Mexican rice tray, then straight over to the fried fish. I saw him grab a handful of piping hot fried tilapia like it was nothing. I swear I heard a sizzle and got hit with the distinct smell of burnt flesh.”

Sherman Baine, Store Manager of the Golden Corral location, was unsurprised by Frakes’ utterance and subsequent domination of the taco bar and attached quesadilla station.

“We’ve actually been seeing a lot of this since reopening,” Baine reported, his hand near a security walkie-talkie at all times. “Something about the restrictions being relaxed, the reduced-capacity limits going away…it’s awakened something. Something primal and dark within our customers. I’ve never seen people eat like this. It’s beginning to get in my dreams. I just see an endless chain of Midwesterners in khakis, their hands full of plates, their plates full of our signature Golden Delicious Shrimp. I can’t get a moment’s rest.”

As of press time, Frakes was seen frantically headed to the restroom whispering, “Saturdays are for the boys” for an unknown reason.