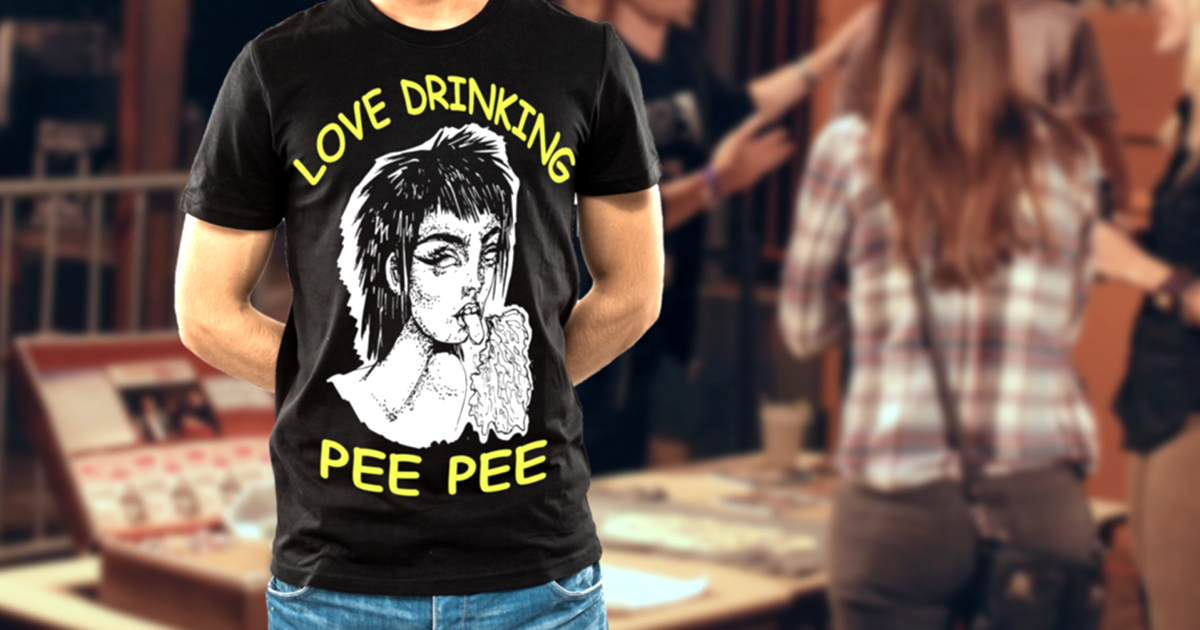 SEATTLE — The dismal sales of a T-shirt featuring an amazing design were blamed on the inclusion of the band name Love Drinking Pee-Pee, potential consumers confirmed.

“I mean, I like the band… I hate their name. I feel like it sounds like some kids in middle school starting a joke punk band, but these guys are usually pretty serious,” said Kevin Phillips, one of Love Drinking Pee-Pee’s conflicted fans. “I would’ve bought the shirt based on the graphic alone — even if it had the band’s initials, I’d have been fine with it. But… no. I can’t spend $22 on something I could never wear.”

Fans who did purchase the shirt expressed regret.

“I really don’t know what I was thinking. I can’t wear this outside,” said Jackie Wilde, one of the few patrons who actually purchased the Love Drinking Pee-Pee shirt in question. “But the art is so good. It’s sort of like a Pushead rip off thing that I thought was cool. Then, I bought it and put it on… and it just says ‘Love Drinking Pee-Pee’ in bold letters. I mean, will Goodwill even accept this?”

The black graphic tee, which all unanimously agreed looked “totally cool,” features work by artist Ian Almeda, brother of the band’s drummer, Karen. Almeda, who was also working at the merch table during the shirt’s debut, was disappointed by the lackluster sales, but not surprised.

“Nah, I get it,” said the artist. “Honestly, I’ve been folding the shirts so the name isn’t visible. People get really excited; then, they unfold it and just look at me like I hurt them in some way. It’s really unnerving.”

Almeda allegedly attempted to print the shirts without the offending text, but Love Drinking Pee-Pee frontman Alex Carlisle threatened to cancel the shirt if the name was not clearly visible.

“Love Drinking Pee-Pee is all about aesthetic,” said the passionate bandleader. “It’s baffling — people think our name is funny when they talk to me in private, but then, they don’t want to display that love in public by wearing our shirts all day? Posers. You can’t separate art from the artist.”

At press time, sources claim a small group of shirt purchasers has formed to research methods to remove the band’s name from the fabric. Additionally, one depraved man announced his intention to remove the graphic and just leave the name.