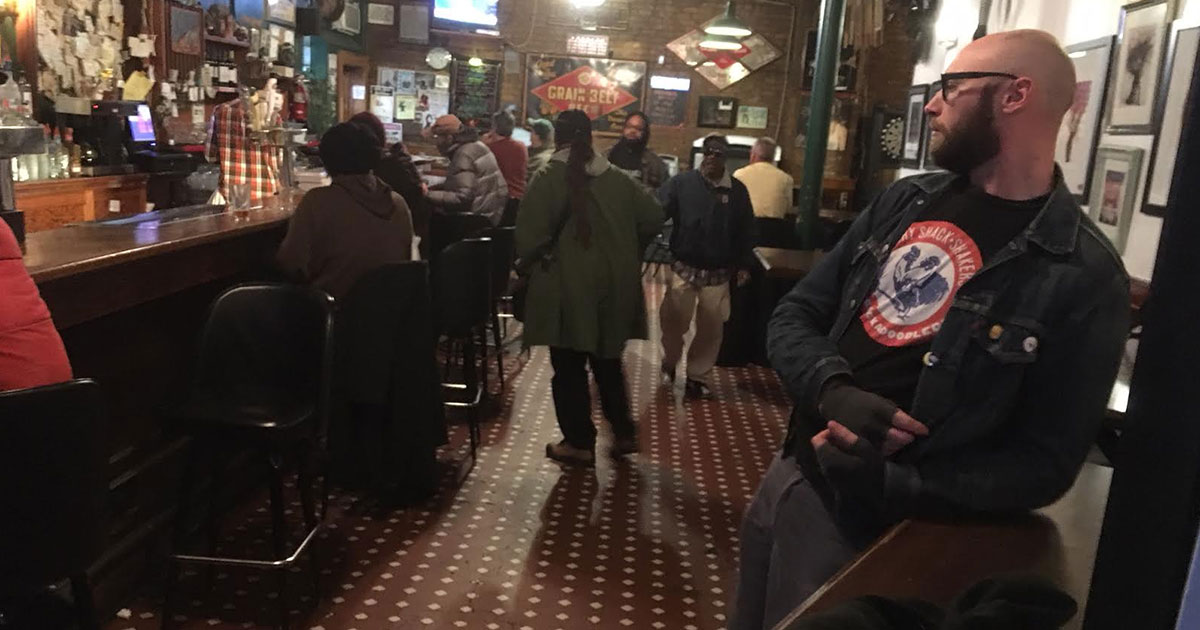 The exhausted 35-year-old waiter spotted the seat, which appeared to be “available and ready for action,” only two songs into a Flo Mags set.

“I really didn’t come out expecting to score a seat, but I guess sometimes a guy might get lucky, huh?” Bergeron said. “As soon as I saw it, I knew me and this chair had a connection beyond words.”

Ex-girlfriend Delia Chavez hoped it might be an upswing in an otherwise dry spell for Bergeron and his bad knees. “John really needs this right now,” she said. “Between throwing his back out loading an amp into his Camry earlier this week, and the double he worked today, it’s been a pretty rough few days for him. It looked like a nice seat. I really hope those two can make it work.”

The chair, a classic barstool fashioned with black leather and accessorised by a single, metal strip across the base, is regarded by many as the best chair in the venue, with minimal tears, good back support, and “no wobbliness or anything.”

“When you see a chair like that, right there in clear view of the stage and with a cushioned back on it and everything, you figure someone’s gotta be saving it,” said Derek Chambers, a fellow patron who stood against the back wall during the entire show. “I figured I’d look like an asshole if I went for it. A guy like me, and a fancy chair like that? It could never work. But I’ll always have the floor.”

Despite his unmistakable attraction to the chair, Bergeron admitted he acted in “typical Bergeron fashion,” second-guessing himself at every turn.

“Listen, I’ll always have the Don’s back — but if he’s not gonna go for it, I will,” confirmed friend Sal Varricchio. “I’m still wearing these heavy-ass steel-toes from work. I’m tired, too. Plus, some super shitfaced lady stumbled in a minute ago, so that seat ain’t gonna be empty for long.”

Bergeron was last seen walking confidently toward the empty stool, only to veer off at the last minute, later leaning up against the jukebox by the bathrooms and cursing himself for being “such an idiot.”