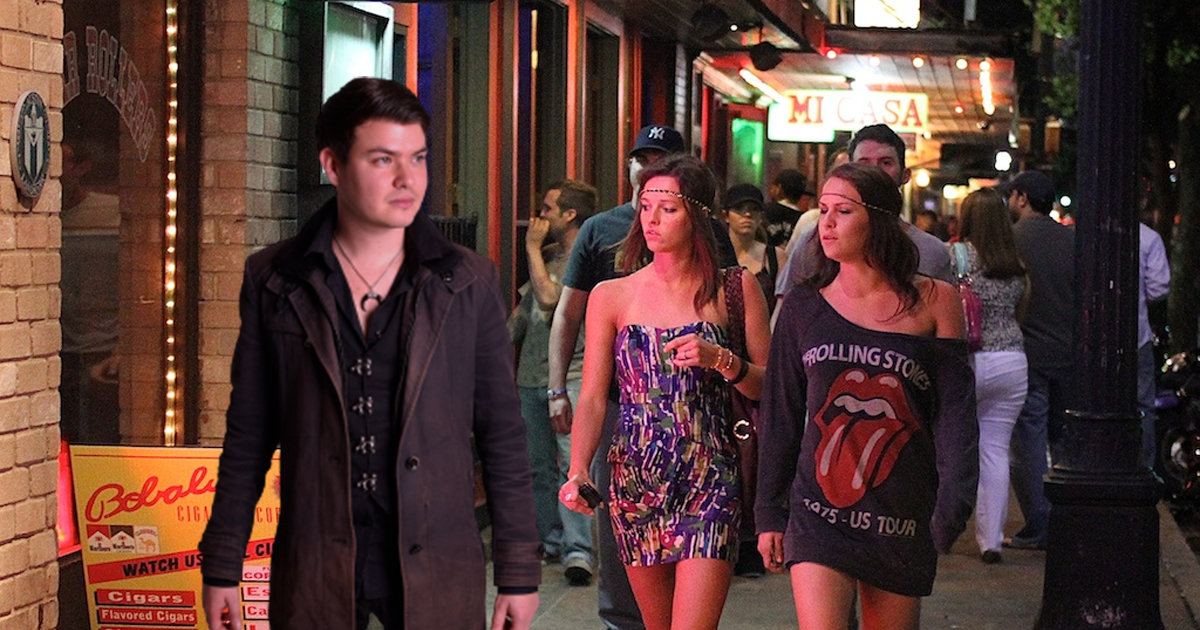 Vampire. Nosferatu. The un-dead. Legends of unholy, immortal creatures with a thirst for human blood have existed for centuries. Could such a long-enduring myth have roots in real life? Do the damned actually walk among us? According to the patrons of one punk bar, the answer is yes.

No one thought it was strange when a young-looking pale-skinned stranger in black clothes showed up at Nickie’s Bar one night. By all accounts, he was amicable, almost preternaturally charming, striking up conversations with people outside the venue with ease. No one noticed anything unusual until the subject of the band that had just played came up and, according to the witnesses, the stranger said “Yeah, I dig those cats, they remind me of early Beck.”

“Dig?” “Cats?” “Beck?” It became clear to everyone in the hang that this man was beyond time. How could a man who didn’t look a day over 24 be using dated slang and casually referencing music from the ‘90s that wasn’t Nirvana? The only explanation could be that this interloper was in fact a Dracula.

Eyewitnesses gave shocking accounts of the high strangeness they witnessed after the dated and damned reference to Beck Hanson:

“He kept putting this small paper tube in his mouth, and it was on fire! He called it a “cigarette.” It was sort of like vaping except, I don’t know, sexy?”

“He wasn’t on any socials, and bragged about only having something called a ‘flip-phone.’ Is social media like the same as mirrors to vampires?”

“I asked him point blank if he was a vampire. He said it wasn’t his scene, but he loved some the movies ‘The Lost Boys’ and ‘The Hunger’ which he said had David Bowie in it. That doesn’t make any sense cause isn’t David Bowie that lighting bolt guy? He was probably just trying to confuse me before moving in for the kill.”

More alarming, researchers at The Hard Times have found evidence of an ancient Beck legend that references a “Devil’s Haircut,” roughly translated as a transactional exchange with a dark entity.

Experts advise that if you ever encounter a vampire at a punk venue, you should cross your index fingers at them in the shape of a “t.” This will remind them of TikTok and they will flee.