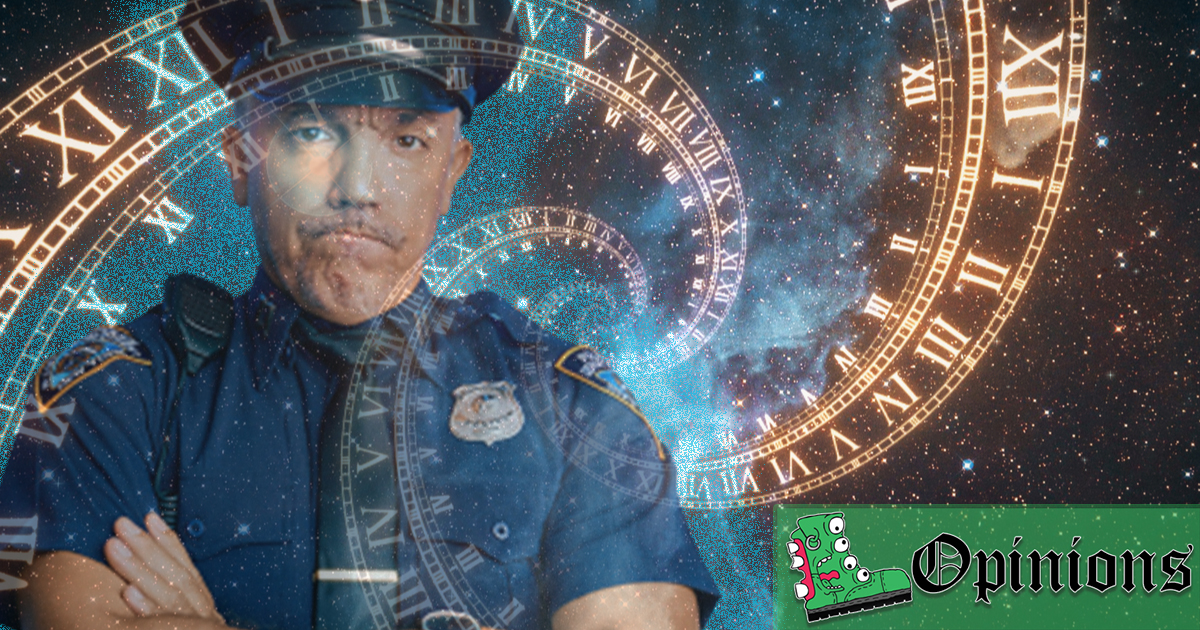 Cops fucking suck. There isn’t anything new with that statement. But at least the douchebaggery that pigs dish out is on a linear plane of existence. These fucking clockhogs though will come and give me all kinds of shit because APPARENTLY I spit in one of their faces thirty years from now.

I remember this one time I was hanging out with some friends in Austria, 1892, when this fucking clockhog came out of nowhere and was like “Hey, get out of here! You guys are trying to kill baby Hitler!” And I was like “Dude, what the fuck are you talking about?!?! We’re just standing here.” Then he made us all empty our pockets and he took my pipe even though that was given to me by an older version of myself. He gave me a ticket for causing a bootstrap paradox. My friend got caught with some Infinity Stones and she got taken away to be reset. I never saw her again.

Why do these assholes have such a boner about protecting baby Hitler anyways? Just let people kill him.

Clockhogs tell us that they are here to preserve the proper flow of the sacred timeline, and normies eat that shit up. Why wouldn’t they? Our media is full of Timecop-aganda painting them as altruistic heroes with our best future in mind. But us temporal non conformists who actually deal with these time-swine see them for what they really are: jack-booted, class traitor thugs hired to protect time-property and enforce the status quo.

Timecops exist to ensure that white males who are carbon based mammals maintain control. They don’t want to see a timeline that benefits people of color, or women, or cephalopods.

If you agree that the Timecops are the real problem, a bunch of us are going to be meeting up last week and having a protest in the Cretaceous period. If anything happens, make sure to wear a mask so you can’t be identified and to keep as still as possible, because the T-Rex’s vision is based on movement.