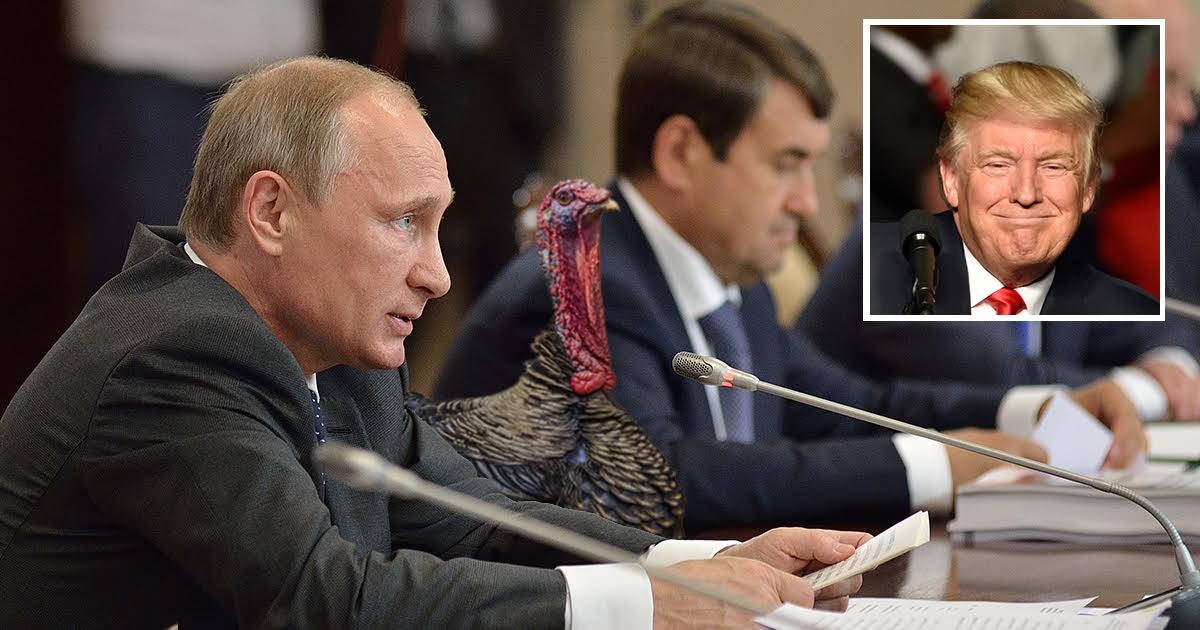 WASHINGTON — A new wave of allegations was brought against President Trump today, now under investigation for pardoning a turkey with direct ties to Russian government officials for the traditional National Thanksgiving Turkey Presentation, sources confirmed.

“President Trump had thousands of turkeys to choose from for this event, and he chose Tómas Турция — who was recently photographed with Vladimir Putin and Sergey Kislyak, amongst other top Russian officials,” said FBI investigator Landry Scott. “We are still unclear of Trump’s full relationship with the turkey, and if they had contact before the Rose Garden ceremony.”

Despite the immediate backlash, President Trump only doubled down on his choice to spare the 22-pound bird.

“Tómas is a great turkey. The best turkey. Look at him, he’s huge — have you ever seen a turkey this big? I’ve seen bigger. I’ve raised bigger turkeys myself, but this is a big one,” said the president, his arm around the large bird. “Nobody is eating this guy, but if you want great meat, Trump Farms has the best birds you could eat. All white meat.”

Early reports indicate that Attorney General Jeff Sessions may have had contact with Tómas after campaigning for Trump last year — a claim Sessions denied.

“The allegations of then-Senator Sessions meeting with a noncommunicative bird alone in his office are completely and utterly false,” said a spokesperson for Sessions. “Mr. Sessions could not have taken this meeting. He is deathly afraid of birds, reptiles, and children under the age of eight.”

Meanwhile, Trump supporters defended the president for his choice.

“Do you think Hillary would have pardoned some bird from a southern state? I don’t think so, partner,” said Dale Owens of Stone Mountain, Ga. “She’d pardon a bunch of turkeys from Benghazi and force our farms to observe Sharia law.”

Historians were quick to point out that this is not the first controversial selection for the annual National Thanksgiving Turkey Presentation. George H.W. Bush drew attention for pardoning a turkey that had spent the previous two years in Iran, while Bill Clinton pardoned a bird that was a known member of the Symbionese Liberation Army.