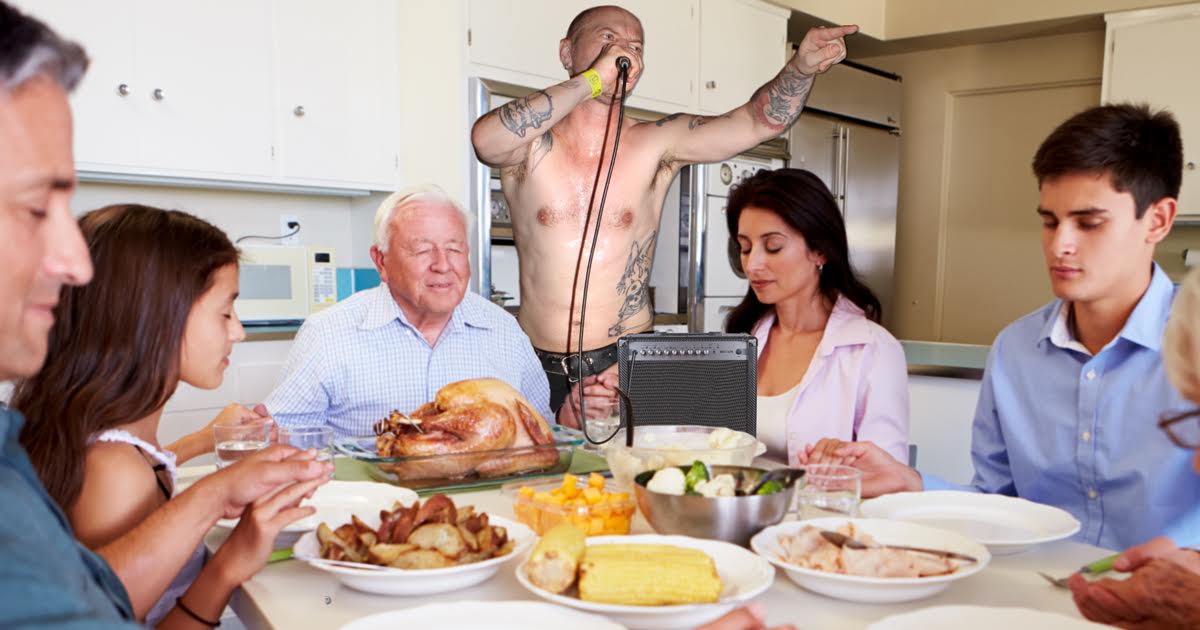 BINGHAMTON, N.Y. — Local frontman Mike Croft delayed his families Thanksgiving dinner with a 20-minute shoutout to “everyone and everything he’s thankful for,” irritated guests confirmed.

“Wanna give a quick shout out to Gammy Mabel for use of the space tonight,” said Croft, part-time line cook and full-time frontman for hardcore band, Street Legion. “We got a really cool thing happening here, and it’s up to us to stick together and keep this shit going!”

“Also wanna give it up to Aunt Patty for killing it with that sweet potato casserole,” he added. “You got the marshmallows nice and melty without burning a single fuckin’ one!”

Some guests say they were “irritated” and “confused” by Croft, who was pacing around and pointing at everyone as their dinners continue to grow cold.

“He talked for almost five straight minutes about stuffing and then made everyone ‘give it up’ for all the thanking that went on before him,” said Phil Larson, Croft’s Uncle who made the two-hour drive from Utica. “I don’t know what the point of that was, but I am very hungry, and so is my wife.”

The simple family ritual took the emotional yet long-winded turn when Croft initially took 10 minutes to explain what Thanksgiving means to him, reminding all of his relatives they are “literally like family to him.”

Optimism for a conclusion allegedly arose around 17 minutes in.

“I thought he was wrapping it up when he said ‘everyone, be sure to stick around after dinner to watch some old home movies,’” said cousin Tammy Croft who had stepped out for a cigarette. “But that all went out the window when he popped his shirt off, wiped the sweat off his face, and started going on about the Mayflower.”

UPDATE: Croft has called for the kid’s table to come closer. “Move up, motherfuckers!” he yelled. “You are the future. We need you front and center.”