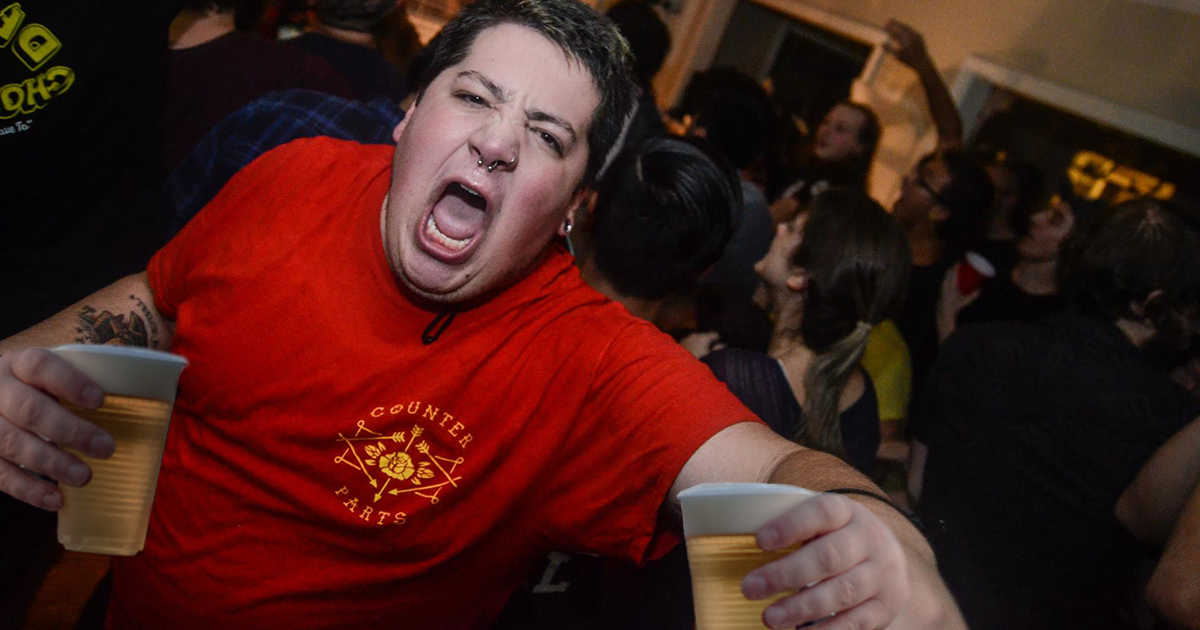 IOWA CITY, Iowa — A punk house venue played host to an unwelcome and unnecessary question-and-answer session for local woman Johanna Hunwick last night, after “wicked shitfaced” guy Ryan “Rhino” Ross sought to learn why she was not drinking, according to uncomfortable bystanders.

Sources confirm Hunwick, who came to see her friends in Classless Chaps close the show, was approached by Ross while inconspicuously checking the weather on her phone from a dark corner of the venue’s basement.

“I saw this chick over there sipping water, and I’m like, ‘Wait a minute,’” said an intoxicated Ross. “I mean, I was just like, ‘What the fuck,’ you know? It’s a fucking party, you know what I mean?”

Dressed only in cargo shorts and a single sock, Ross, well known for his drunken and oft-nude antics, took it upon himself to inquire about Hunwick’s lack of “wasted-ness.” “This sweaty guy carrying an open case of Beast Ice around like a boombox or something stumbled over and started asking me if I was ‘too good’ to have a drink with him,” Hunwick said.

For Hunwick, who just celebrated seven years of sobriety last month, such altercations are neither rare nor surprising.

“It happens pretty much every time I go to any shows, parties, or family functions,” she said. “First they seem kind of weirdly mad about it; then they try to, like, challenge me, or something. But most people end up forgetting why we even started talking in the first place and leave pretty quickly after they get distracted or have to use the bathroom.”

For Ross, the conversation took an emotional turn just minutes in, bombarding Hunwick with the details of his interpersonal relationships, all while attempting to keep his eyes open.

“He actually only seemed interested in the drinking stuff for, like, five seconds. Otherwise, he mostly just talked about his landlord bringing him a recycling bin or something, and how he’s not sure why his girlfriend doesn’t trust him, even though he ‘fucking loves the shit out of her crazy ass,’” Hunwick recalled.

Shortly after offering Hunwick a departing noogie, Ross was seen leaving his newfound confidant by doing a Frankenstein impression while screaming, “Besties!” before unceremoniously falling onto a table of empties.