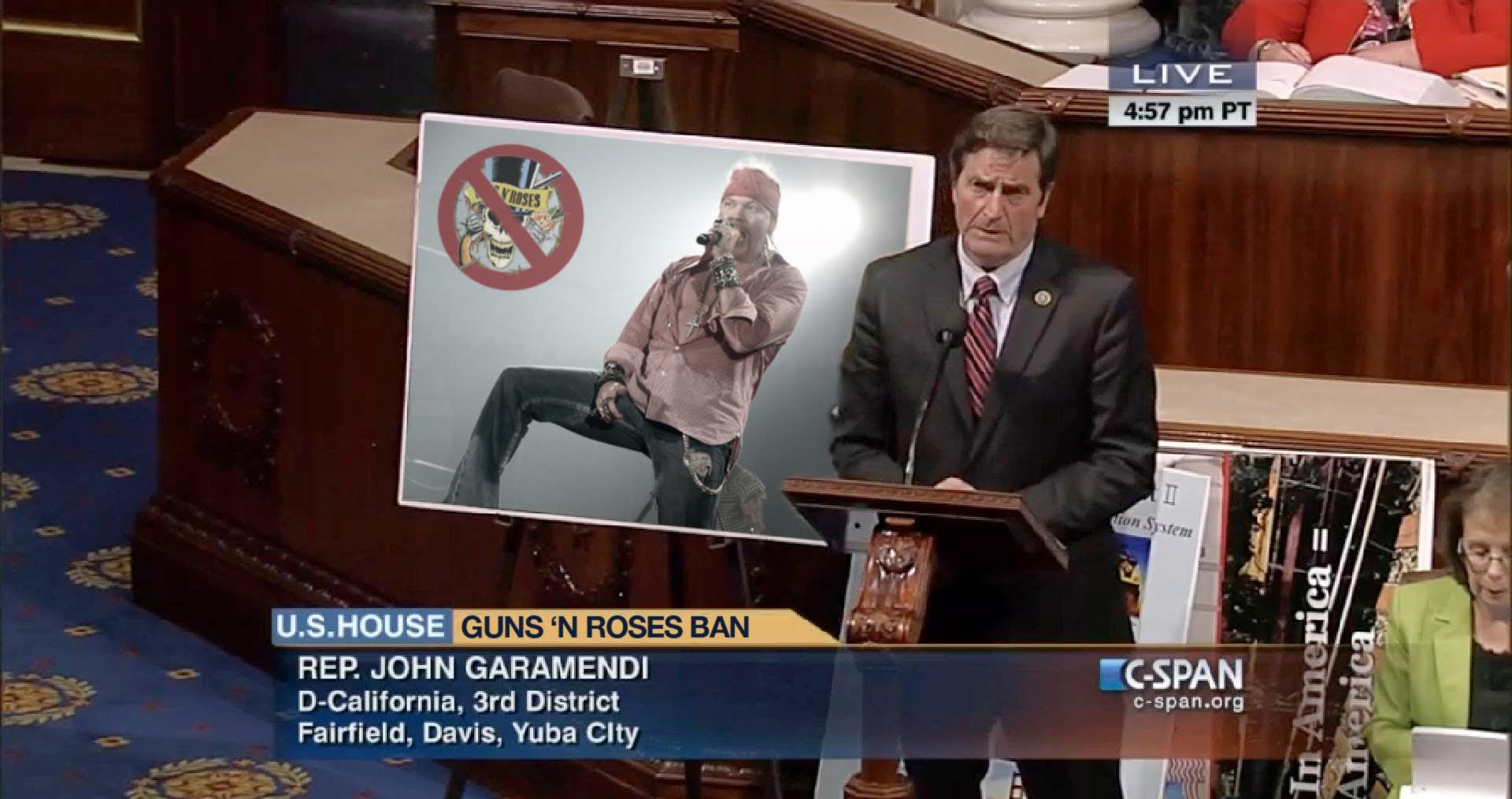 WASHINGTON – After decades of debate and countless failed attempts, politicians on both sides of the aisle have finally united to pass a federal ban on Guns N’ Roses.

“It’s been a hard fought 20 years,” said Congressmen Colt Flaggerty (D — Delaware). “But after the tragedy that was Chinese Democracy, enough is enough. How could we turn a blind eye to this issue after that? Does a person really need to own multiple Guns N’ Roses albums in a high-capacity CD changer? I think our forefathers never envisioned the First Amendment would be abused in this way. If they did, they might have never written it in the first place.”

While Congress has been united in enforcing the first ever outright ban on Guns N’ Roses, their constituents are divided in their support of the bill.

“How could you ever get rid of ALL the Guns N’ Roses? There’s simply too much out there!” said Cincinatti native Garett Remington. “Besides, if they’re not listening to Guns N’ Roses, they’ll probably just listen to LA Guns, Bullet Boys, or Poison. If people want to listen to bad butt rock, they’ll find a way.”

Remington added, “I only listen to my albums in the safety of my car, far away from where people live and work. And at night I keep them locked in a safe. It’s just being responsible.”

But others were not so supportive.

“Look at countries like Japan, Germany, Australia, England, I mean, the list goes on and on. They all banned Appetite for Destruction decades ago,” said mother of two, Shelly Smith. “Those countries haven’t had a Guns N’ Roses concert in years, and when they do, it’s front page news. I’d feel a lot safer sending my kids to school if I knew they wouldn’t be exposed to Guns N’ Roses.”

Many have accused Mr. Greffen of having significant financial interest in the sale of Guns N’ Roses, and have discredited his statements.

“It’s a mental health issue,” said Stanford professor of psychology James Wesson. “If we don’t head off the stigma that you have a mental illness if you listen to Guns N’ Roses, we are just hacking at the branches of the problem.”

Many are already anticipating the law will not have much teeth, as the prevalent and controversial “Guns N’ Roses Show” loophole has been a way for many people to avoid the 48-hour waiting period to buy Guns N’ Roses music (instituted after “The Spaghetti Incident” was released in the 90’s), by simply attending a Guns N’ Roses concert.

“We have people walking into these shows, and fifteen minutes later, they’ve got a Guns N’ Roses album. This is unacceptable! We need to do away with these loopholes. Really, we’d have to be the biggest fucking idiots on the planet not to,” said Congressman Flaggerty.