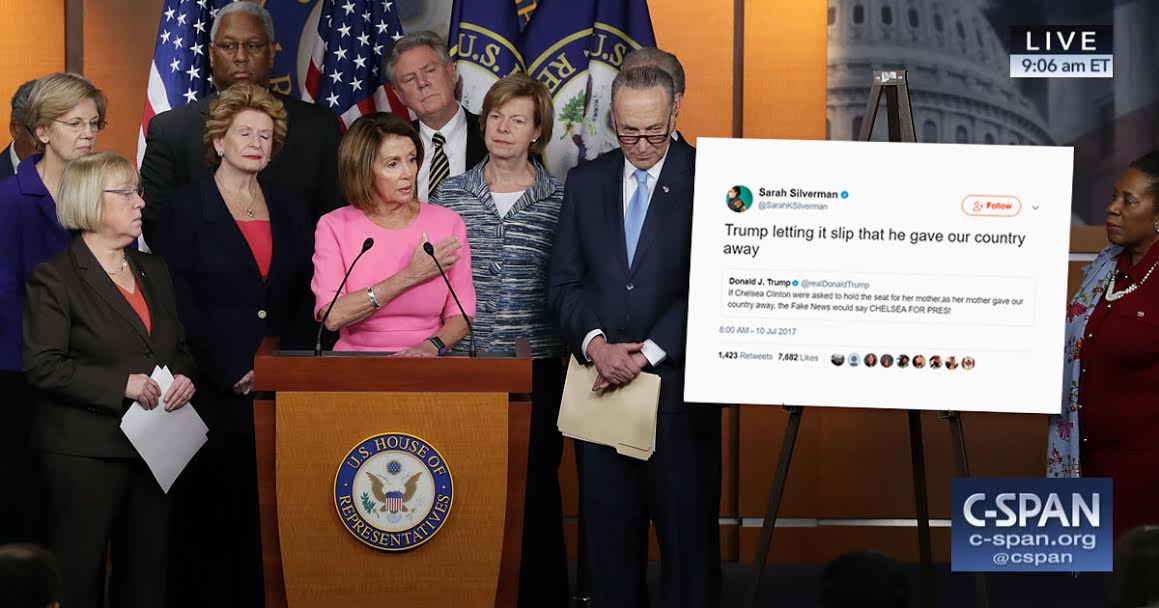 “According to U.S. Code [10 U.S.C. § 974], comedic and sarcastic jibes from the nation’s top comics and personalities can be used as evidence in Congressional impeachment debates,” explained Schiff. “We fully expect to present the eviscerating quips of Sarah Silverman, Patton Oswalt, Samantha Bee, and many others.”

Top Democrats are relieved to finally have enough material for impeachment, thanks to the constant stream of tweets.

“The jokes cover a wide range of topics, from specific policy foibles to Donald Trump’s gigantic, flabby ass crammed into ill-fitting athletic gear,” said Democratic National Committee Chair Tom Perez. “With a few dozen more tweets to reach the 50,000 retweet mark, we’ll have all the ammunition we need to immolate the Trump presidency.”

Pundits speculate the effort may eventually include crippling tweets from personalities lesser known to the mainstream, but wildly popular on Twitter. Potential contributors include the absurdist musings of @dril, parody accounts such as @god, and rising comedian social justice warriors like @JenKirkman.

“We’re currently researching to see if tweets by foreign comedians can also be used,” continued Perez. “Between @rickygervais and Indian superstar Vir Das [@thevirdas], we could add tweets that reach an international audience of millions and regularly disembowel the administration.

“We are prepared for any counterattack from Republicans, such as a torrent of Scott Baio tweets,” added Schiff. “Somehow that squirrel-looking asshole held off the entirety of Hollywood in the election results. Not this time, though.”

However, an anonymous source leaked a report of division amongst Democrats.

“The progressive wing of the party favors notorious loose cannons, such as @cher and @lenadunham,” said the source. “Centrists lobbied for Hillary Clinton’s ‘Delete your account’ tweet, but received backlash from progressives who understand how lame that tweet was.”

Republicans responded to the potential impeachment by encouraging their constituents to participate in a letter-writing campaign declaring allegiance to the President, along with a vow to avoid the internet or new information entirely.