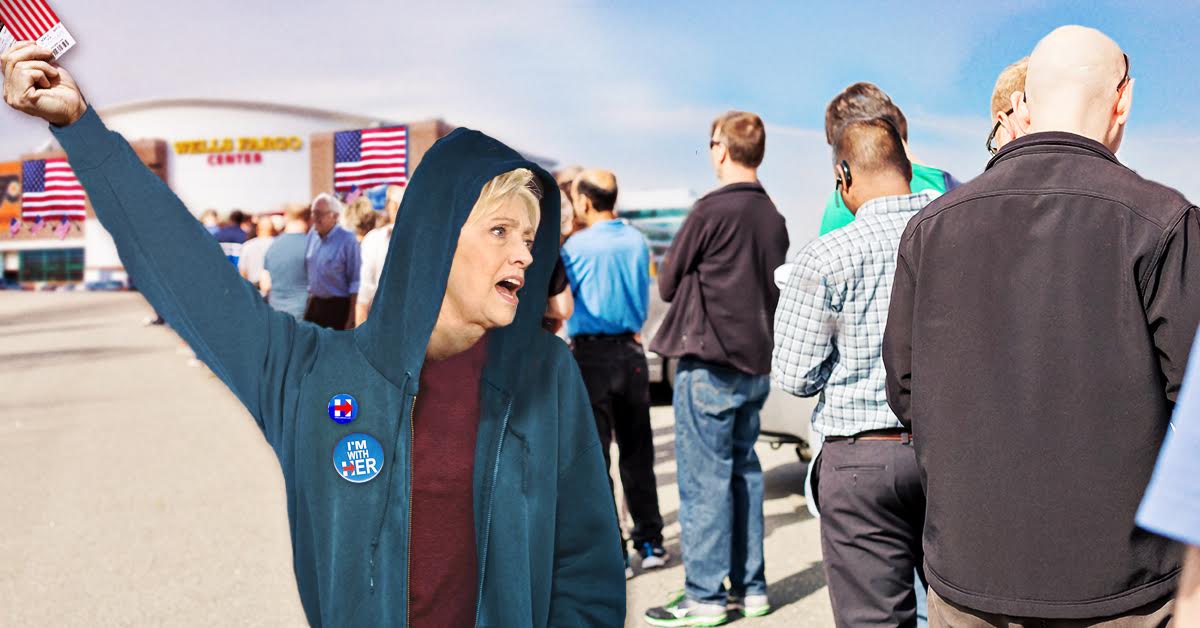 PHILADELPHIA, PA – The Democratic National Convention has been headlined by greats like Al Gore, Michael Dukakis, and Jimmy Carter. This year Hillary Clinton has been chosen as the party’s top-billed act, after the former senator and Secretary of State sold enough tickets to headline the main stage at the pay-to-play event in Philadelphia.

Initially considered a lock for the event’s headlining slot, Clinton was required to sell millions of tickets before the Convention would even consider having her play at all, after popular support for her campaign waned.

“We were worried about turnout, to be quite honest,” said DNC Event Promoter Tim “Weasel” McDougal. “Hillary is just not drawing as much as she used to. With all the ‘Bernie or Bust’ talk going on, we were thinking of needing to take a cut of Hillary’s merch just to cover our overhead.”

“Selling tickets is the hardest part of this process,” explained Clinton’s bedraggled publicist, Robby Mook. “But fortunately our candidate had the mainstream support and brand name recognition to energize the fanbase. Sure, we’re polling even with an actual lunatic, but we’re confident that — having sold all the tickets necessary — we’ll beat Trump in November,” he continued, his voice quivering like a leaf.

Many were skeptical that Hillary’s genre of flip-flop politics could still draw sufficient crowds for a headlining event, but Hillary turned to the support of die-hard superdelegates to get the word out.

“Basically, we were hitting up coffee shops and telling everyone we could about the show,” said superdelegate legend and scene mainstay Dennis Archer. “Most people remember Hillary had sort of an Oi!-influenced, Rock Against Communism vibe in the past, but she’s evolved her sound — she’s a lot more jammy now, with some grunge influence. I think most people don’t know about her new sound.”

“One of the things that makes Hillary so marketable is her adaptability,” said Mook. “If there’s a new trend that goes against her platform, she’ll switch it up. For example, she’s asked all women and people of color to come to the front. She’s not afraid to change her tune if it could send more support her way.”

Mook then added that Hillary is already writing a bunch of new material in preparation for November.