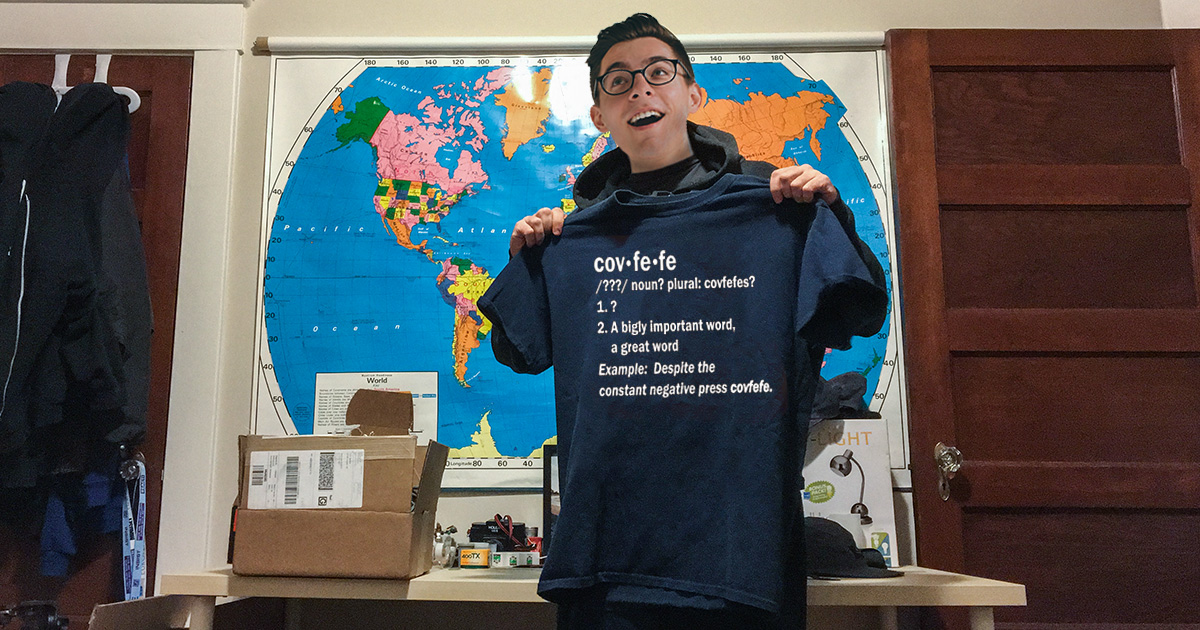 “My wardrobe has a lot of really hilarious shirts,” said 28-year-old Wayne, holding up the shirt featuring a bold-lettered “Covfefe.” “But I think this one is probably the funniest. It’s better than my ‘Vote For Pedro’ shirt, better than ‘Three Wolf Moon,’ and even better than that ‘Keep Calm And Birthday On’ shirt I treated myself to last year.”

Those close to Wayne seemingly do not share his unbridled enthusiasm for the shirt.

“He came out of his bedroom with this wide grin on his face, choking back laughter and waiting for me to ‘get it,’” said Carson Doolittle, Wayne’s roommate. “It took a solid 40 seconds to sink in. I just kind of chuckled and said, ‘Yeah. Cool, man.’”

“Christ, it feels like that tweet was years ago,” Doolittle later added of the widely-lampooned message posted by President Trump on May 31st, 2017, reading, “Despite the constant negative press covfefe.”

“I hate 45, so I love this shirt,” said Wayne. “It’s the perfect example of how stupid he is. He can’t even make sentences! As soon as that story broke, I knew I had to find a shirt for it. I stumbled on an Amazon vendor named Hottrendtees2005shirt — it was just as simple as paying $35, plus an $8 standard 16-19 week shipping rate, and, voila! The perfect shirt is here.”

The creator of the shirt admitted he’s had a windfall of cash since Trump’s initial tweet.

“As soon as I saw the tweet, I knew I could cash in and make a difference,” said Hottrendtees2005shirt CEO Harrison Belger. “I donate $3 from every order to the Trump 2020 re-election campaign. It ain’t no big deal — shirt only costs me a couple bucks to make, and these snowflakes just keep buying.”