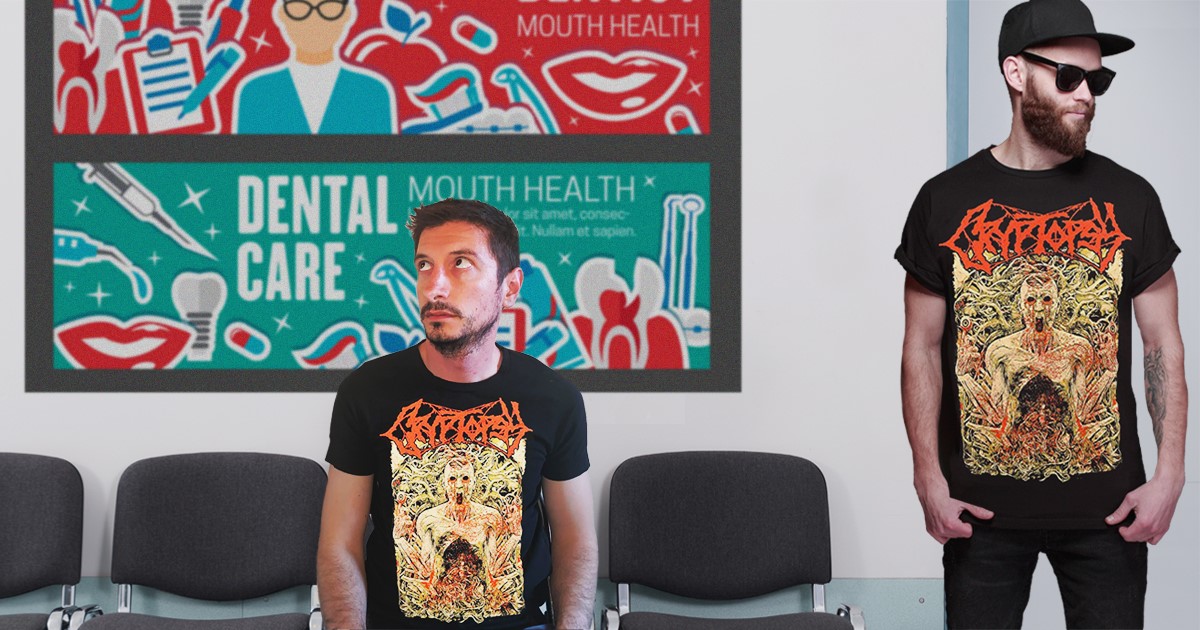 “I thought they were brothers — or at the very least, friends,” explained receptionist Gabrielle Gordon, who has worked at the Crown Heights dentist office for five years and has never once seen a single person in a Cryptopsy shirt, let alone two in a single day. “The shirts appear to be identical, and both guys had similar, patchy beards… but they’re not acknowledging each other at all, and the tension is palpable. Oh, and their first names both may have been Robert, but due to HIPAA, I can’t confirm or deny that.”

Robert Bly, who had the earlier appointment, denied any knowledge of noticing anything unusual in the waiting room.

“Uhh, there might’ve been someone else in the waiting room… but to be honest, I can’t even remember,” recounted Bly while avoiding eye contact with anyone. “If there were another person there, though, I’m sure he wasn’t as big of Cryptopsy fan as I am, that’s for sure — probably one of those bandwagon fans who didn’t keep listening after ‘The Unspoken King,’ and probably doesn’t have Flo’s autograph on the back of a ripped flyer, either.”

Robbie Patterson, the other patient, offered a much less guarded analysis.

“That’s fucking it — I’m moving out of Brooklyn,” declared Patterson in a fit of rage. “You can’t go anywhere without someone jockin’ your style. Can I have just one fucking band to myself? One band? What are the odds that some poser who only knows ‘None So Vile’ because they saw it on some Anthony Fantano Top 10 list video has to sit down right next to me before a teeth cleaning? My brother made me listen to it back in 1997 when I was 10, and I was so scared I cried. That’s how true metal fans are made.”

In related news, police were called to a Williamsburg poke shop, where 12 unaffiliated men in Darkthrone shirts ate simultaneously, prompting fears of a cult ritual by elderly neighbors.