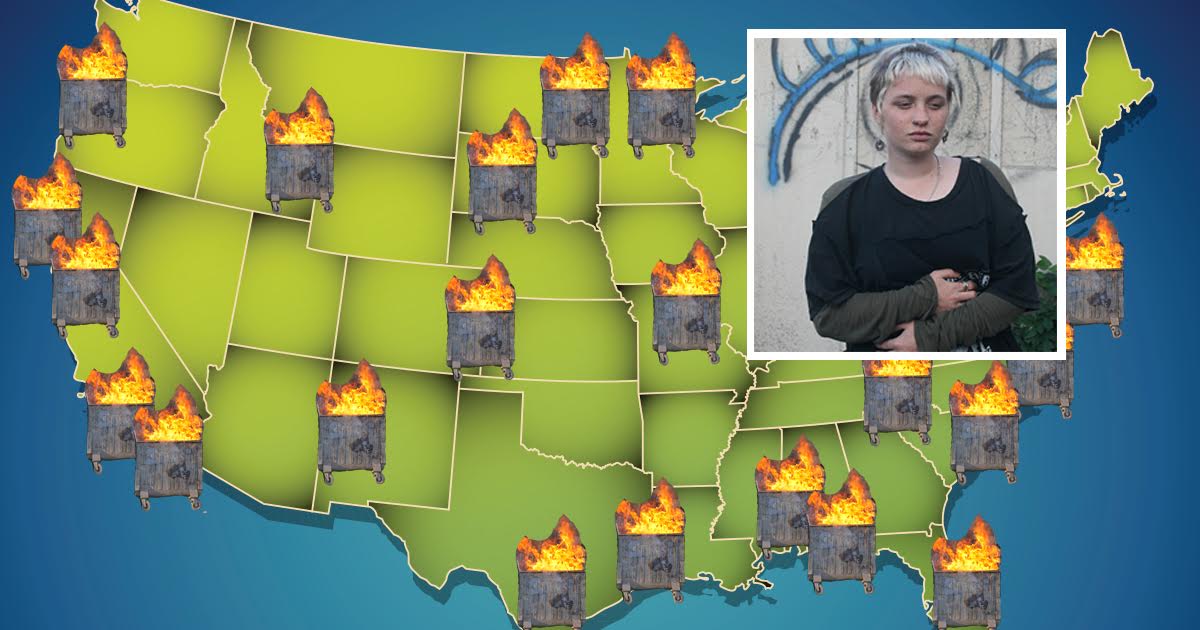 WASHINGTON — Scientists have confirmed that the current nationwide dumpster fire is adversely affecting the national crust punk population, according to a new study conducted by the Environmental Protection Agency.

Starting with the inauguration of President Donald Trump, the dumpster fire has run rampant and unchecked, leading some experts to wonder how long our nation’s crust punks can survive.

“At first I figured it wouldn’t affect me much,” said Andie “Skunkton” Monkton. “I mean, yeah — his travel ban was obviously an unprecedented and somewhat obvious attempt to bolster anti-Muslim rhetoric, but now I see how much shit he stirred up. I don’t know where to dive for my next meal.”

The EPA study concluded that nearly 70 percent of U.S. dumpsters are currently either smoldering or show signs of significant flames, while an additional 10 percent were recorded at elevated temperatures, thanks to the President’s actions.

Trump dismissed the study during a press conference, calling it “fake news to propagandize against [him].”

“Everyone knows these studies are fake,” said Trump. “The science is flawed, OK? We’re not responsible for this. It’s sad… America’s dumpsters are the most beautiful in the world.”

While the administration refutes the findings, crust punks nationwide are feeling the effects as their food and shelter sources diminish at record pace.

“Crust punk behavior is shifting with the demands for survival,” said Stanford University Professor of Sociology Margaret Seirson. “Crust punks are asking friends for more money than ever — some are breaking into their parents’ homes while they’re at work. We’ve even observed some buying vegetables from actual grocery stores.”

The endgame of the trend is still unknown, but Seirson is fearing the worst.

“It’s unsustainable, frankly,” she said. “If we sit idle, we’re going to see more crust punks dying in the streets… or worse yet, applying for jobs and assimilating into mainstream society. It won’t be pretty.”

Show your support for The Hard Times with a new shirt from our online store: