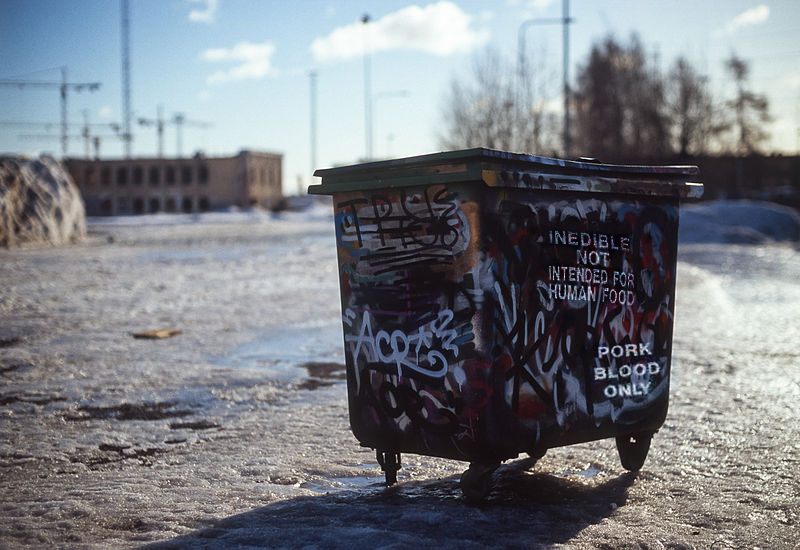 OAKLAND, Calif. — Local crust punk, who asked to be identified as “Tik Tak,” was disgusted to learn that the two new dumpsters placed outside of the Rockridge Shopping Center refused to serve vegan options, multiple hungry sources confirmed.

“We separate glass from aluminum,” said the malnourished millennial, who is not forced to live this way but does so by choice. “Why not [separate] meat-based waste from plant-based waste? I’m not trying to be picky here, I just don’t want to contribute to the suffering of animals while I am trying to avoid contributing to capitalism.”

Tik Tak has adhered to a vegan diet for the past five year, his friends, The Cardbored Boyz, can often be found licking plastic packages at the recycling bin near the Jamba Juice.

“You know, it’s one thing to pick coffee grinds and used ketchup packets off of a killer vegan donut, I’m totally fine with that, said local punk known only as Dribbles. “But I’ll have to throw out a perfectly good piece of day-old bread if it’s sitting next to a quarter-full cup of Matcha Green Tea Blast. When will this mall realize not everyone eating out of the dumpster is FREEGAN?”

Mall staff admitted they have no plans to accommodate their vegan crust punk, but not freegan, customers in the future.

“Trash is trash, it all goes to the damn landfill. These fucking assholes around here are always calling me ‘bloodmouth’ because I won’t fill one of these dumpsters with tofu or some shit” said Rob Gainly, a maintenance worker in charge of disposing of trash in the shopping mall, said. “It is not my job to be their personal cafeteria worker, go to the damn Whole Foods and buy some rice already.”

As of press time Tik Tak was seen loudly complaining in a Starbucks parking lot about the complete lack of dairy-free alternatives in the coffee he had stolen from unaware customers.