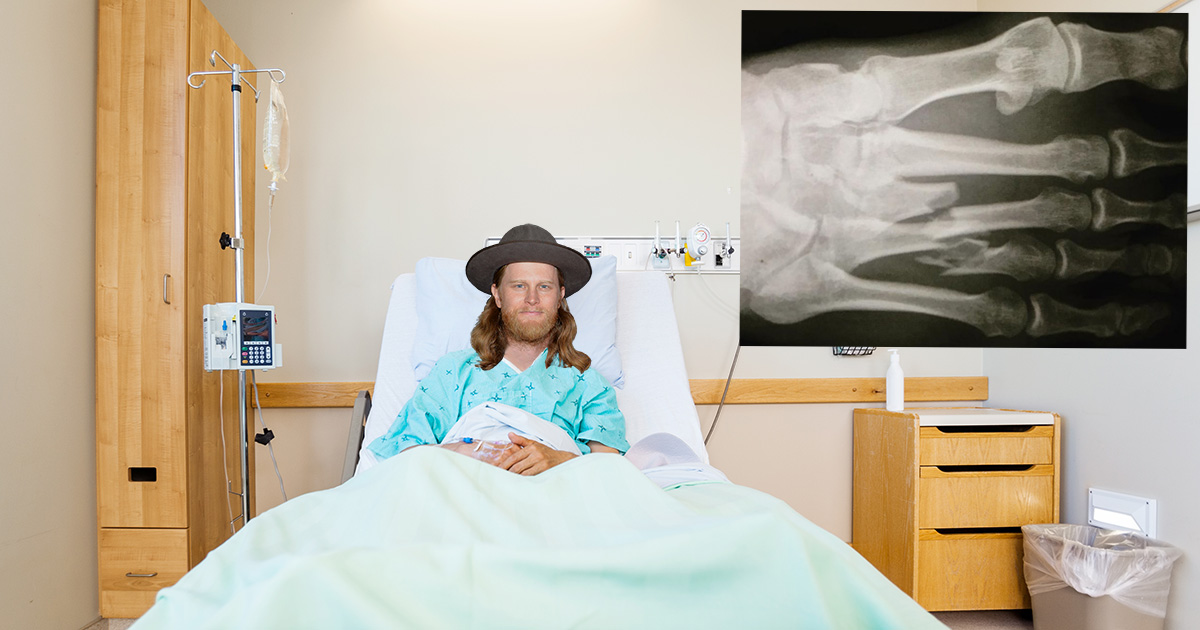 “I feel terrible for our fans,” said Schultz from a hospital bed. “They pay good money for our foot stomps, hand claps, and yelling ‘Ho, Hey!’ like a folk-rock Naughty by Nature. It breaks my heart to let them down like this. I’m hoping I can make a speedy recovery — I need to show the world this injury can’t stop my rhythmic stomping. It’s festival season.”

While Schultz is expected to fully recover in 3-4 months, the band’s doctor claimed the injury could have been avoided with proper footwear selection.

“Look, I know the dusty, old boots fit in with whatever faux-Americana gimmick they’re trying to pull,” said surgeon Claudia Castillo, looking over X-rays of the injured foot. “The fact is, if he’d had a decent pair of cross trainers with real ankle support, this probably never would have happened. I think the suspenders and pork pie hats carry the look well enough — they shouldn’t be sacrificing safety for aesthetics.”

During Schultz’s absence, the band will look to replicate his production live — a task that may be easier said than done.

“If we were in the studio, we could beef up my stomps in the mix and get by,” said percussionist Jeremiah Fraites, wrapping his foot in thick gauze for tonight’s show. “But up on that stage, there’s no faking it. If I don’t bring my best stomps, those fans will throw their mustache combs at me all night. We don’t want another Tampa on our hands.”

At press time, the band were closing in on a deal with Mumford and Sons to receive two of their best stompers in exchange for the Lumineers’ second-round draft pick and three minor league prospects.