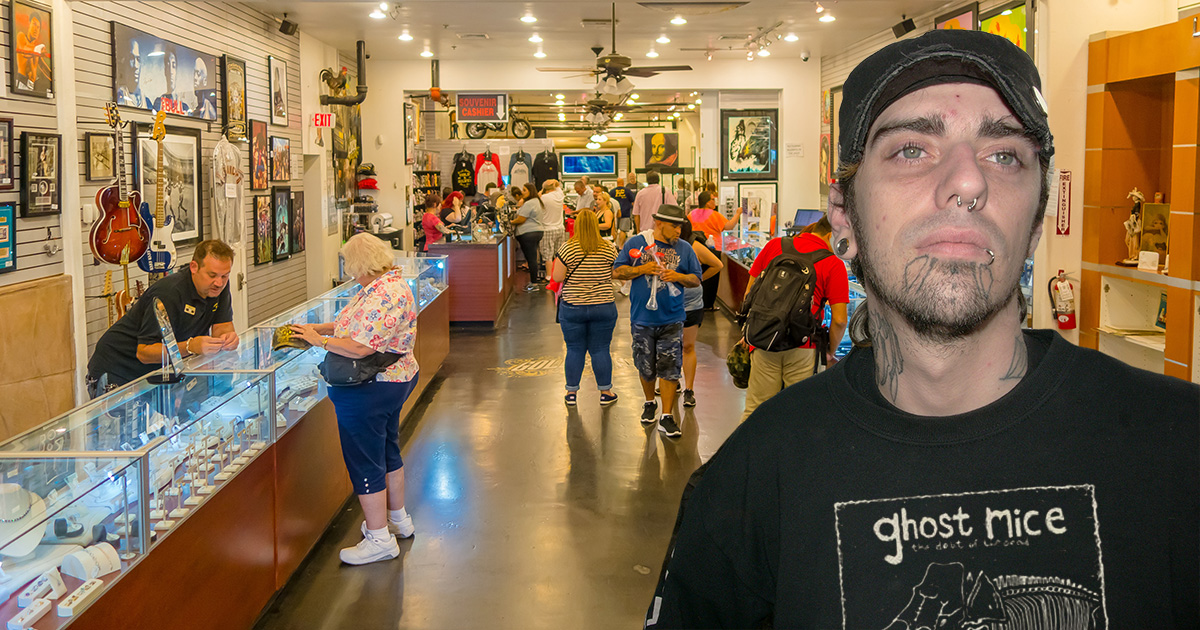 “This was one of the hardest things I’ve ever had to do. I used that saw on both Wayward Cork albums, and I can’t tell you how many folk-punk bands have rolled through town and asked to borrow that trash can lid. It just has such a distinct ‘ping’ sound that makes me think it’s a unique alloy,” said Goodwin after counting the $8 he got for the trade in. “Money has been tight. It seems like nobody wants to buy art made from pine cones and cigarette butts anymore. I even switched to using non-smoked butts because of COVID, but still no takers.”

Members of the local folk-punk scene were devastated to hear that the instruments were pawned.

“I remember seeing Eli playing that saw back when Silicone Tramps were still together and he blew me away. The way he would bend it all weird, and then occasionally hit it on his thigh was a thing of beauty. It sucks that we might be losing such an important part of our city’s legacy,” said Abbie “Munch” Heuten. “We’ve been trying to raise some money to go to the pawn shop and buy back the instruments, but the capitalist pig who runs the place wants like $20 for both items. It could take us years to get that much money.”

“Yep, been looking for a metal trash can lid for a couple of years now. I lost mine back in 2016 when some teenagers hit my cans with their car, and never was able to find a replacement. None of them that they sell down there at the Home Depot fit my can, I tell you,” said Landis, while slowly milling around the pawn shop considering each and every piece of merchandise in the store. “Hell of a saw, too. Not missing a single tooth, still seems sharp as the devil. Doesn’t look like anyone has ever used it to cut anything. Yep, I think these will do nicely.”

UPDATE: The San Antonio folk-punk scene has completely collapsed after members of the popular band Instant Insect had a string of tin cans stolen from their Volkswagen van.