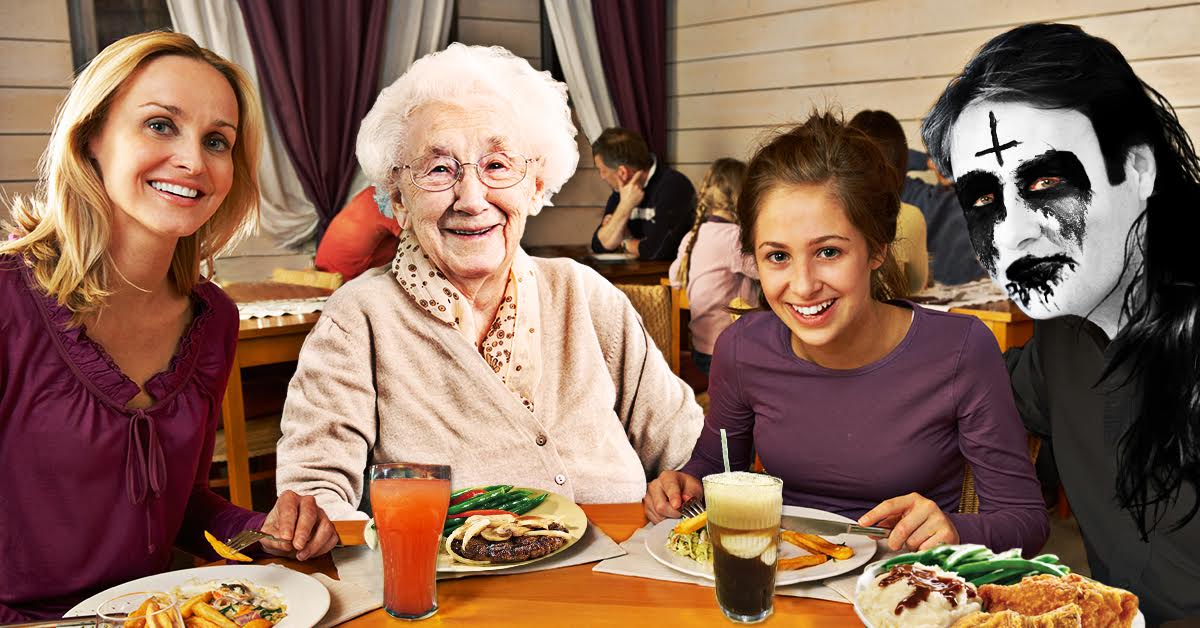 “I couldn’t believe it,” said Lucas Hansberry, metal fan and buffet lover. “At first I thought maybe I had eaten a bad piece of shrimp when I saw what looked like a guy in full corpse paint across the banquet hall. But sure enough, there he was, looking he just stepped out of a snowy ancient forest.”

“I didn’t think that Geryon even had a family,” said Malmastecon fan Jason Cicchitti, seated two tables away from the embodiment of death. “The liner notes of their first record say that Geryon was found by a group of Norwegian hunters alone in the forest when he was a baby and that he grew up in a haunted orphanage.”

Warbringer was slightly disturbed by the two fans constantly sneaking glances in his direction.

“Those two dudes were weirding me out. It’s like they’ve never seen an old woman celebrating a birthday. I’m glad I got to spend some time with my Gammy, but next time I might ask for a booth in the back,” said Warbringer while waiting in line for the bathroom.

“Yeah, I saw that guy drink goat’s blood on stage one time,” Hansberry added. “It’s somehow more off-putting seeing him drink a Dr. Pepper. All the sugar in colas is really bad for you.”

The demystifying experience reportedly featured several humanizing moments from Geryon, which left the two fans unable to reconcile the apocalyptic lyrics of their favorite band.

“I mean, he was playing peek-a-boo with some baby in the cheesecake line, for fuck’s sake,” lamented Cicchitti. “What kind of parent lets their baby play with someone who goes to an old lady’s birthday party dressed like a demon? Unbelievable.”

As Gammy’s birthday entourage made its way from the Old Country Buffet to the bingo hall next door, Hansberry and Cicchitti watched in disbelief. “I think there’s still a chance he burns this place to the ground,” Cicchitti said.