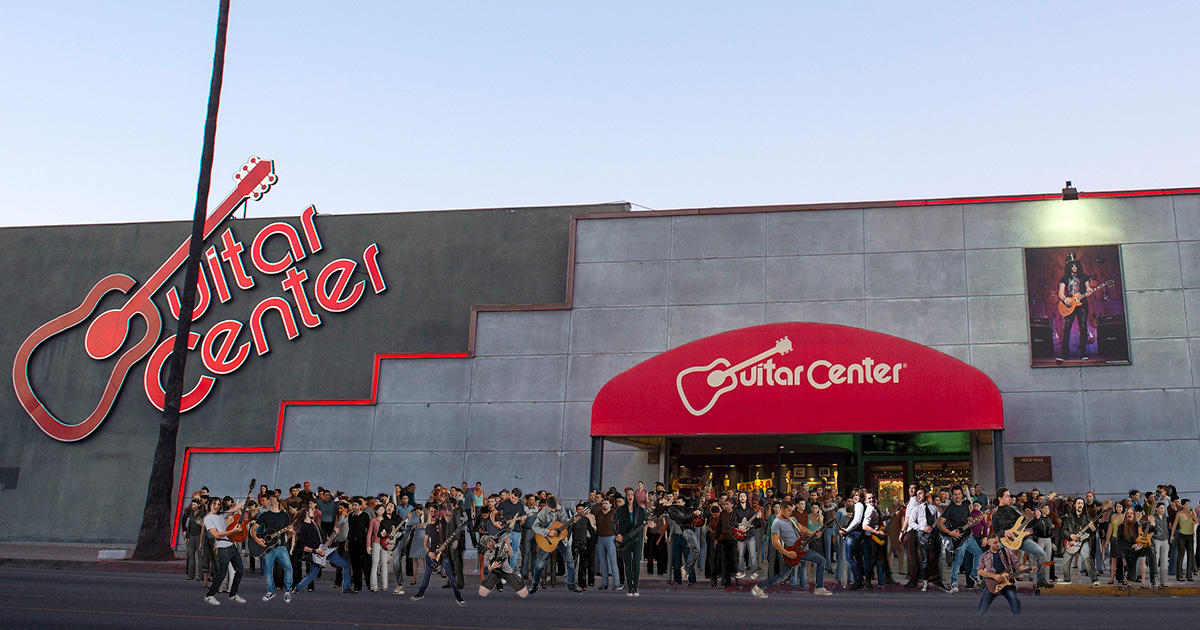 “People aren’t shopping at Guitar Center anymore. Corporate is desperate,” explained local guitar technician Pat Sarge. “So we’re doing the only thing we can do: a benefit concert. It’ll be customers and employees, all together — just, like, jamming out. Should be a killer time.”

Event planners are coordinating 97 of the best amateur shredders across the country to perform their rendition of the iconic intro to “Sweet Child O’ Mine,” the most popular hit heard within Guitar Center. True to Guitar Center fashion, the intro will be played “not quite right: with a few wrong notes, and the timing just a little off.”

“With a little luck, we’ll get all 97 performers to play together as a headlining act… but not, like, together together. Not, like, in sync or anything,” said lead benefit coordinator Jenna Fin. “The goal is 97 dudes, all on stage at once, as loud as possible: preferably not even listening to each other, and definitely not in tune.”

“Anything less just wouldn’t be on brand for the Center — and isn’t that why we’re all here?” she added, before clarifying that earplugs will not be available for purchase.

The release confirmed additional riffs are booked to precede the headliner, with the first three measures of “Stairway To Heaven,” the opening chords of “Wonderwall,” and the main riff of Nirvana’s “Come As You Are” all slated for an appearance.

Despite a few naysayers, there’s been little public resistance to the lineup.

“People don’t want us to change it up,” said Dude #78, 13-year-old Alex Kim. “It’s a benefit. Let’s give the people what they want — that GNR riff over and over for, like, nine hours straight. Literally non-stop… even after my mom is telling me it’s time to go do my homework and everything.”

Organizers are also reportedly including a merch booth, complete with T-shirts for attendees to try on but not actually buy.