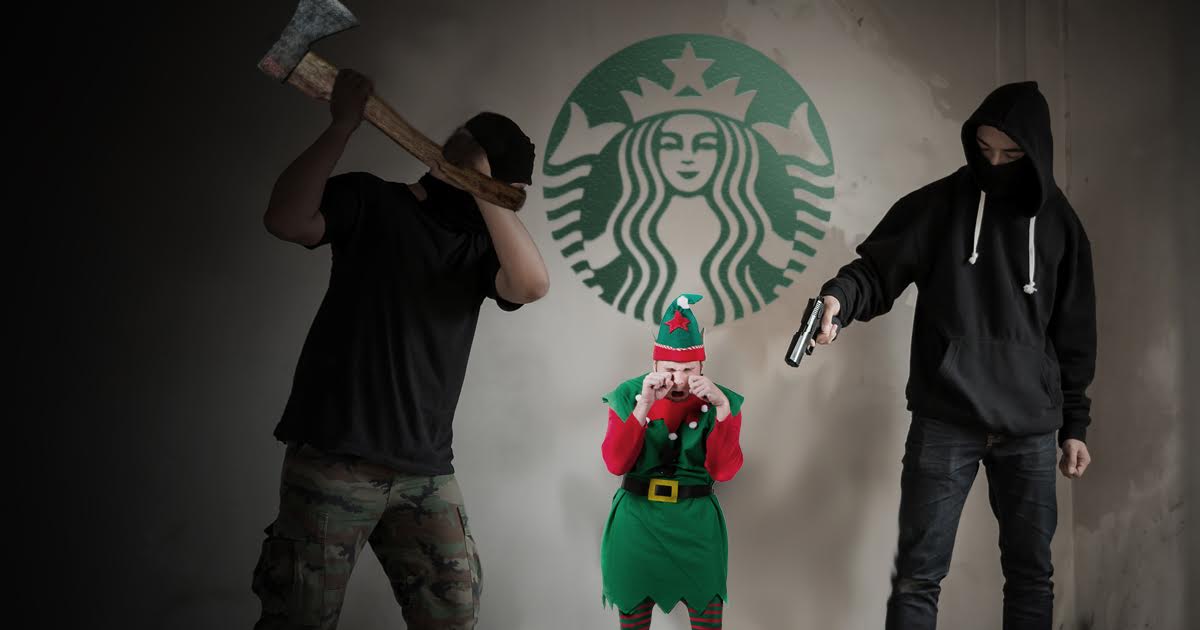 SEATTLE — The War on Christmas took a disturbing turn this week when radicalized Starbucks employees released a shocking video showing the beheading of one of Santa’s elves.

“The video is very disturbing, and should not be viewed by anyone who still has a sense of wonder surrounding the holiday season or a weak stomach,” said Blair Waterson, a reporter for Seattle TV affiliate KING5, of the video in which Starbucks employees yell, “Happy Holidays!” before crudely sawing the head off of a helpless elf.

The elf, later identified as Sprinkles, was reportedly conducting routine quality assurance inspections of mall Santas in the Pacific Northwest when four masked Starbucks militants jumped out of an unmarked van and kidnapped the 357-year-old magical Christmas imp.

In the graphic video, Sprinkles is forced to denounce Santa Claus and repeatedly state, “It’s just a coffee cup. Get over it,” before he is ultimately killed.

“Starbucks hates Christmas. We always have. The cups were just Phase 1 of the War on Christmas,” said Schultz in a grainy video filmed at Starbucks headquarters. “Phase 2 will see the snow banks of the North Pole run crimson with elf blood.”

In a rare interview, a deeply disturbed Santa Claus issued a statement to the coffee giant.

“Ho, ho, ho. These gloomy Seattle assholes aren’t fucking around,” said Jolly Ol’ Saint Nick with a twinkle in his eye. “But do they know who they’re messing with? I’m fucking immortal. I span the globe in one night, delivering joy to all who are good… but this year, I will deliver terror to all who oppose my holiday dominance.”

President Trump was quick to release a statement condemning the attack on the Christmas elf.

“Sad. Maybe time for Starbucks boycott?” said Trump in a series of early morning tweets. “Terrible coffee anyway. Always tastes burnt. They can’t even get good beans! I have the best beans and the biggest Christmas tree. So big it would make your head spin!”