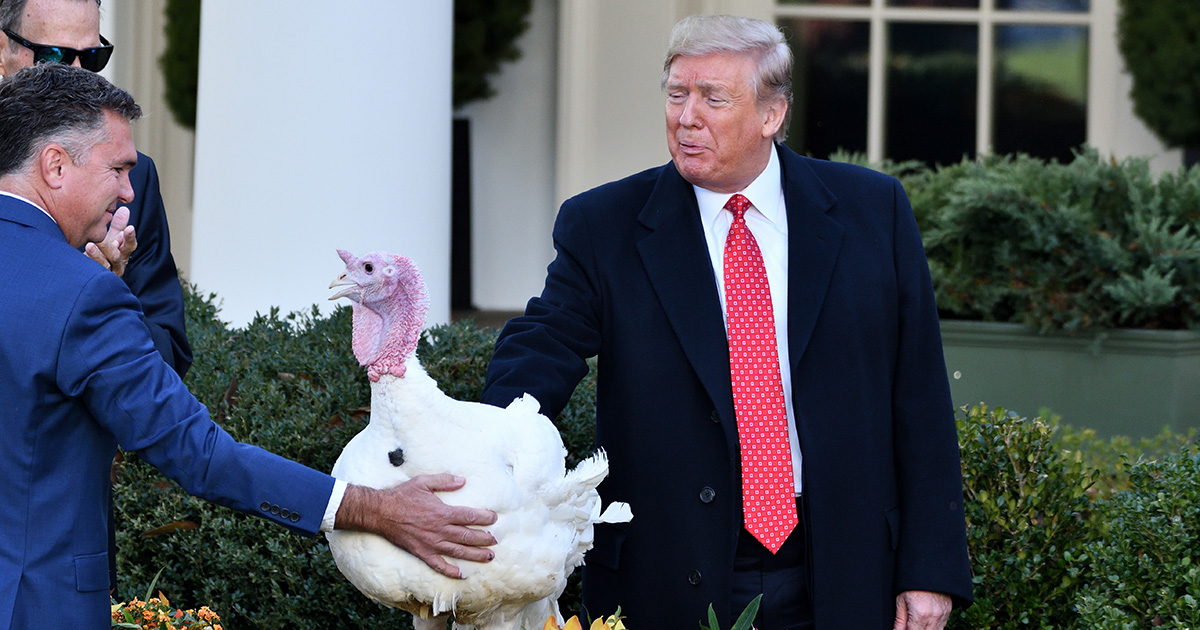 WASHINGTON — Onlookers at the traditional Thanksgiving White House turkey pardoning ceremony were left unsurprised today after President Trump attempted to sneak his own name onto the list of turkeys receiving pardons.

“First off, it’s totally fake news that I’d try to sneak my name into this year’s turkey pardon,” said President Trump. “I didn’t sneak anything in, because I openly inserted my name into the pardon list, and it’s a great name, folks. One of the best names. This little thing called the Constitution says I can pardon whoever I want, O.K.? I mean, I’m pardoning a bunch of turkeys, and their crimes are probably a lot worse than mine, believe me. Some of these turkeys are real nasty birds — some of them should be locked up, to be honest. At the end of the day, I don’t need a pardon, but as long as Democrats are trying to persecute me and these innocent turkeys, I will use my power to get results.”

“If any of the turkeys voted for me, they can live,” Trump added. “All the others need to die.”

Reporter Aaron Conklin was among the bemused witnesses.

“The President was making a big show of reading off the names of the turkeys before mumbling under his breath, ‘Donald J. Trump is pardoned of all crimes against America,’ and hoping nobody noticed,” said Conklin. “Then he brought out some official documents and tried to get the turkeys to sign the papers. When they wouldn’t, he said, ‘Well if they won’t, I will,’ and signed his name. I’ve covered every single one of these events — nobody has ever asked turkeys to sign their own waivers.”

Legal scholar Becky Gunn questioned whether the move was even constitutional.

“If you were to ask the founding fathers if a President could pardon themself, I think they’d laugh in your face,” opined Gunn. “They’d probably also ask what Thanksgiving is, why black people are free, and what the hell a turkey pardon is. Regardless, there’s no way he could do this and have it hold up in court — it’s a turkey pardon. Unless he’s trying to reclassify himself as a turkey for shirking taxes… I think that’s one of the excuses he used to dodge the draft.”

Immediately after the ceremony, members of President Trump’s inner circle scrambled to hire the lawyers who defended the turkeys once they realized that treason is still considered a prosecutable crime.