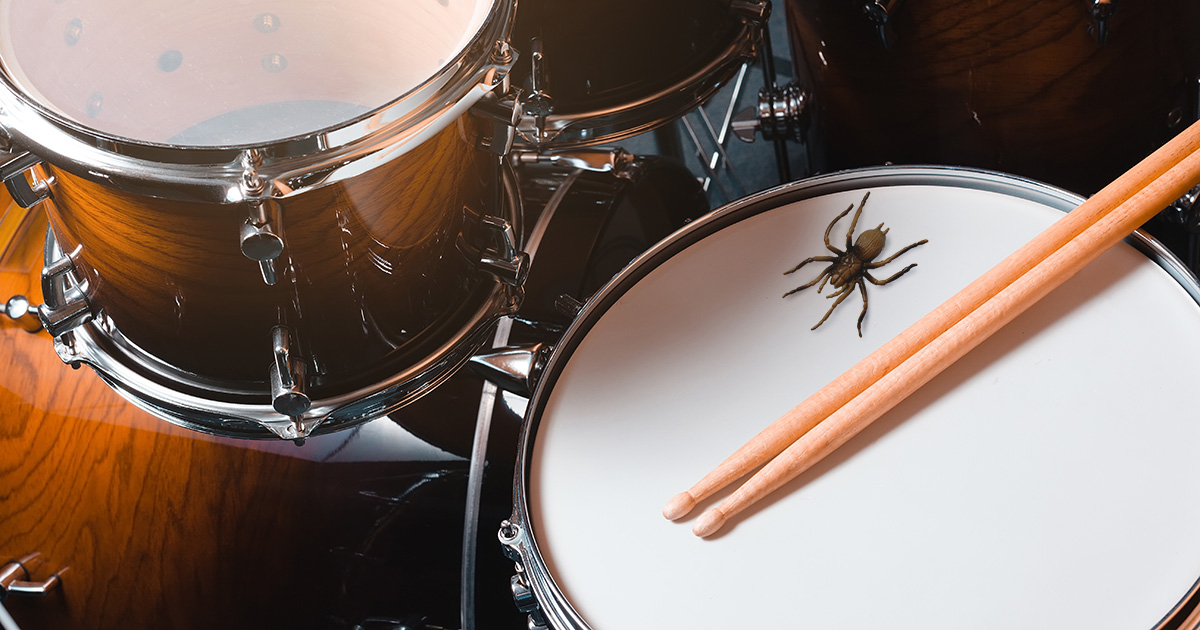 “Since we can’t play any live shows, we’ve been slacking on rehearsing… and the spider took advantage of our laziness and basically claimed the entire kit for itself by spinning an elaborate web of death that I don’t plan on falling victim to. I’m just not that metal,” said Daniels, with his closed-face skull hoodie fully zipped. “I was already planning on selling that kit anyway. Maybe I can claim it as a charitable donation on my tax forms or something. I suggested to the other guys in the band that we pack up what we can and try to rebuild in a new practice space, just to be safe.”

Guitarist Zig Stantz believes it falls to Daniels to deal with the spider, rather than relocate and buy a whole new set of drums.

“There’s a pulsating egg sac covered in spines on the double kick pedal that looks like it’s ready to explode evil, eight-legged beasts all over the place,” Stantz said as he clutched a can of hairspray and a barbecue lighter. “I understand why Levi is being such a puss — the spider itself has markings that look like an epitaph in a forgotten language. I’m pretty sure none of us even have the power to kill it. I firmly believe this spider was sent from hell.”

Arachnologist Dr. Joelle Tableton confirms the spider is known to science, but has yet to be properly studied and classified.

“None of us will fucking go near it,” said Tableton from a distance. “We know it builds its webs exclusively on ‘metal’ gear, like drums with more hardware than necessary, or guitars at least as obnoxious as a Flying V or Explorer. It has to eat something, but all it seems to take in is carbon monoxide and irradiated lead. To this point, we’ve been unable to collect any further data. For me, when I get within six feet of it, I can hear my dead mother screaming.”

“My official recommendation is that the house be abandoned and exorcised,” she added. “The band should begin auditioning new drummers.”

Since discovery, researchers were flocking to church in search of hope, while Speedwolf was creating a crowdsourcing page to fund their upcoming acoustic EP.