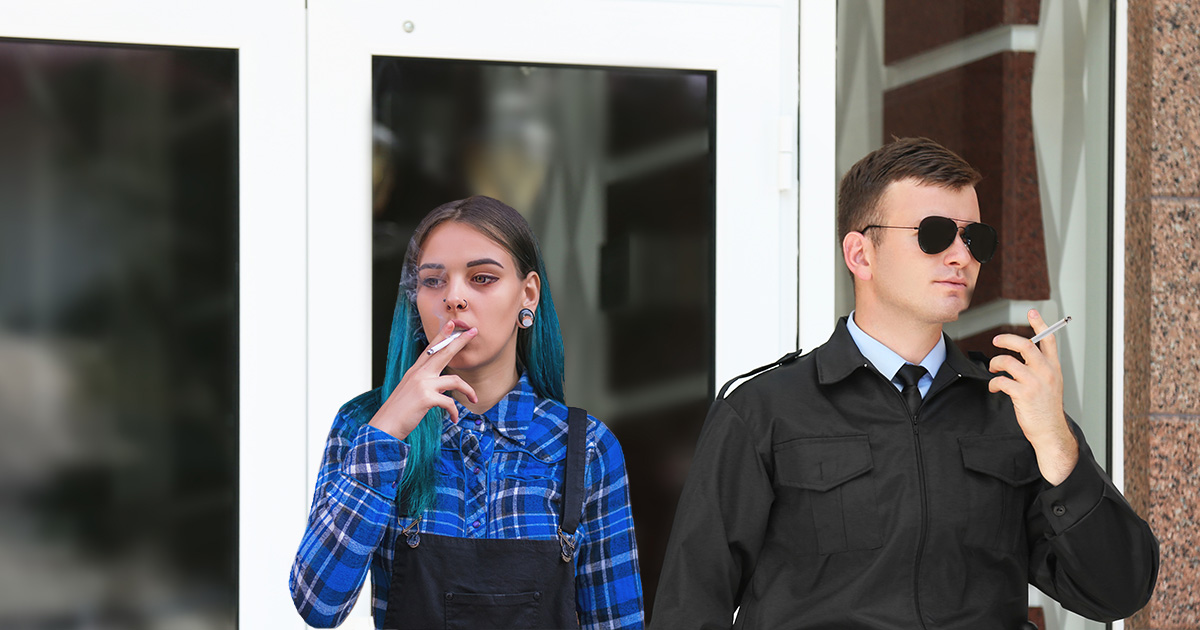 SPOKANE, Wash. — Office punk Kory Strawser recently formed a tepid peace with the security guard at her day job when both came to the realization that they are the last two employees with ongoing nicotine addictions, sources considering going cold turkey confirmed.

“Man, I fucking hate cops. But I gotta admit, it’s a relief to know there’s always someone around in case I need to bum a Parliament on my afternoon break,” relented Strawser while checking if there were any half-smoked butts left in the ashtray. “Me and that security dude have been at odds since day one when he caught me trying to huff that aerosol duster he uses to clean his computer. So yeah, it’s kinda weird that now he’s borrowing my lighter and asking me if I have any plans this weekend. As if I’d actually tell him. He’s not even a real cop.”

Senior Security Officer Ron Powilinoski described how the truce eventually came to be.

“The world I grew up in is dead. Now it’s like you can’t smoke anywhere anymore. I drank at the same bar every night for forty years until it got bought up by those yuppies who took all the ashtrays off the pool table,” bemoaned a horribly aged Powilinoski. “Now there ain’t nobody else around except this jerkass kid.”

“Suppose it ain’t all bad though,” Powilinoski continued. “She did tell me about this one music band called ‘Dead Kennedys’ and, as someone who has killed both Nazis and hippies, I like the cut of those boys’ jib.”

“We strive to provide a clean and distraction-free work environment for all our employees. If any employees still choose to smoke then they can do it on their own time behind the dumpsters of the Sheridan Hotel next door,” Krandal said. “Frankly, I’d prefer to just fire both of those smokers. I only hired Strawser because I accidentally hit her with my car and this was cheaper than settling in court — and that security guy is like a year away from retirement and you better believe I’m not gonna follow through on that pension I promised him. I swear, I never thought he’d live this long.”

At press time, Strawser came to the sudden realization that Powilinoski bears a striking resemblance to another security guy who confiscated her skateboard three years ago.