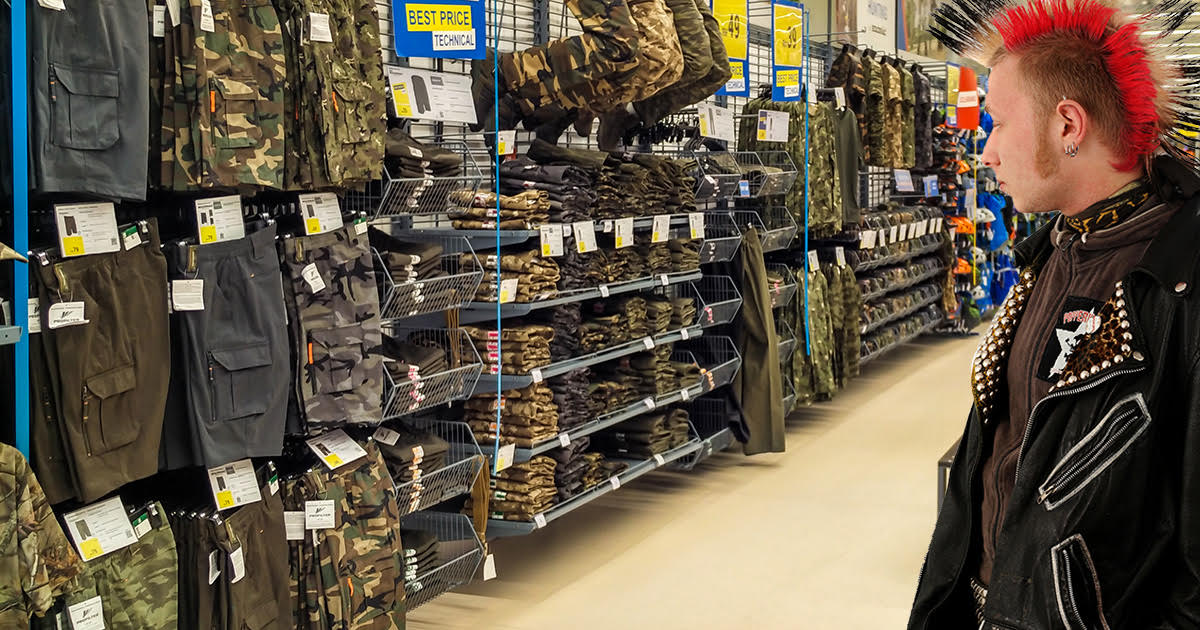 ASHEBORO, N.C. — Local punk Dean Brown set his morals and political ideologies aside again yesterday in order to shop at the Garrett Army & Navy Surplus Store, according to close colleagues of the thrifty punk.

“When I walked in and saw a giant confederate flag and Semper Fi bumper sticker, I knew I was going to have to swallow my pride a little. I’m really tempted to yell at the clerk about his ‘Blue Lives Matter’ shirt, but he’s cleaning an AR-15, so I don’t think this is the best time or place to make a stink,” said Brown while trying on ski masks. “I really don’t want to support the military industrial complex, but where else am I going to buy combat boots, a field jacket, and dummy grenades for under $60? It sucks they have a full section dedicated to replica Nazi stuff, but at least I’m not shopping at Walmart.”

The shop itself doesn’t seem to want Brown’s patronage, but begrudgingly accepts his money.

“Clearly this communist doesn’t belong here, but business has been slow lately and I can’t turn anyone away,” said store owner Paul Garrett as he stocked gas masks. “I will say this for him: the kid knows his knives. We spent like, a half-hour talking about machetes alone, and he ended up buying a 15” bowie knife… and let me tell you, that is a honey of a knife. If two people as different as we are can come together over their weapon collection, maybe there’s hope for this country after all.”

Older punks are all too familiar with the slippery slope of shopping at army surplus stores.

“That place will get inside your head,” said 46-year-old scene veteran Christian McDaniel from an undisclosed location. “Sure, first you go in for boots… then you want to buy a smoke bomb to throw in the lobby of a police station, and the next thing you know, your basement is full of doomsday supply rations and fuel cans full of purified urine. Sure, they’re convinced it’s the government that’s out to get us and I know it’s corporations, but before long, you circle back around on yourself and start storing your keys in an empty ammo canister and listening to music on a crank radio.”

As of press time, Brown was genuinely considering buying a tactical utility belt.