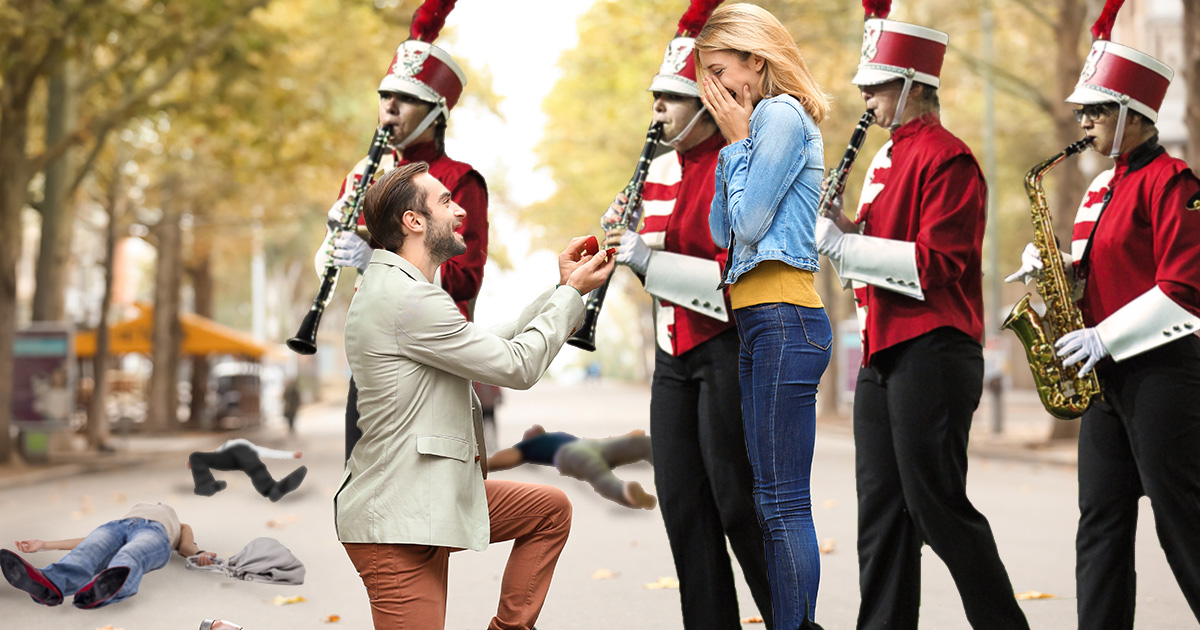 “Recently, a hunky but obnoxious high school jock caused a superspreader event in downtown Shermer while trying to woo the mousy, artsy girl from his chemistry class,” explained Illinois Surgeon General Dr. Macy Hacket. “My understanding is that Stratford, along with a maskless marching band, a local barbershop quartet, and innocent bystanders who spontaneously dropped what they were doing to perform a choreographed dance, serenaded the young woman with the 80s hit ‘Karma Chameleon.’ The grand, romantic gesture was a little cheesy, incredibly charming, and resulted in the slow, painful deaths of many of our valued community members.”

Despite all the carnage, object of Stratford’s affection Kat Eckman was undeniably impressed.

“I always thought Chase was kind of a jerk. Plus, we’re total opposites: he plays football, I wear glasses. It would never work. But what can I say? He won me over. I can’t wait to go to Zoom prom with him,” said Eckman. “Of course, I did still try to maintain a six-foot distance during the whole event, but Chase, the band, and some breakdancing street performers who randomly joined in just kept marching towards me until my back was literally against a brick wall. At that point, I ripped off my mask and yelled, ‘You’re crazy!’ at him, and without missing a beat he yelled back, ‘Crazy for you!’ and then took me in his arms and kissed me.”

Still, those forced to join in the superspreader event, like registered nurse Zach Wilkenson, were horrified by what occurred.

“I just got off a 12-hour shift and was headed to the bus stop when I heard brass instruments pumping out that Boy George song. Next thing I know, I’ve lost all control of my body, my mask is removed, and I’m dancing arm-in-arm with rando construction workers and street vendors. I kept begging and pleading with [Stratford] to stop singing before we all get infected, but he wouldn’t listen,” said Wilkenson. “I suppose I am glad that they found love or whatever. But I’ll be much happier if the scarring inside my lungs heals.”

In a related story, the Biden Administration is waving all safety precautions for anyone running into an airport to stop the love of their lives from leaving forever.