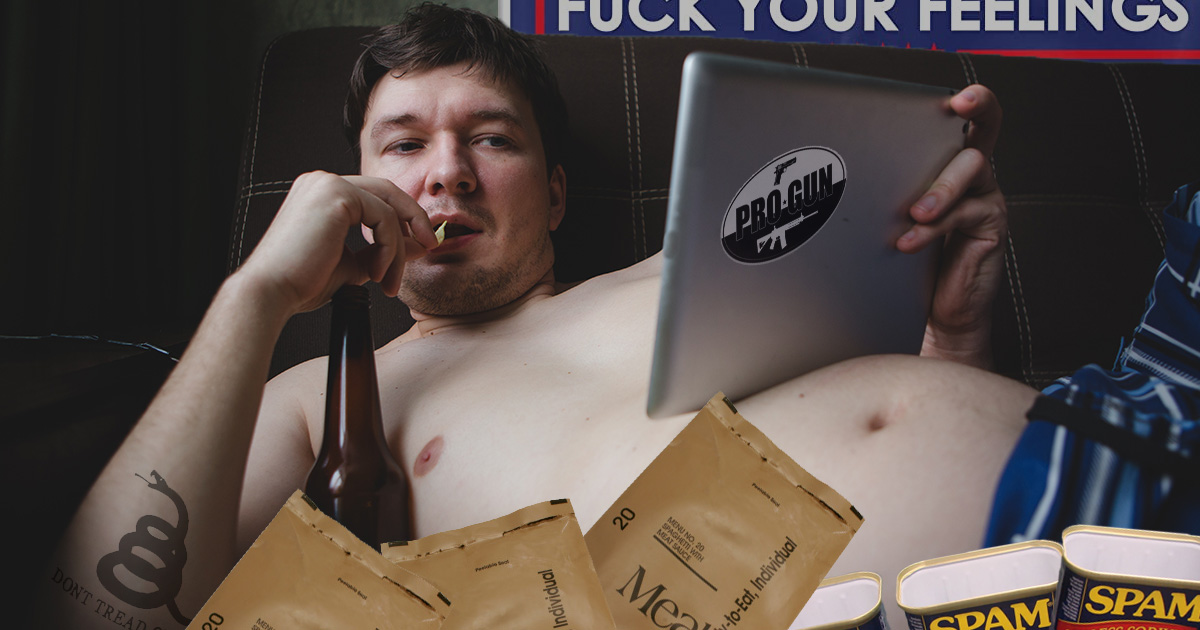 “I know we got this, but the waiting is getting to me, and I guess I’m what some would call an anxious eater,” Hagan said while finishing off a bag of freeze-dried mac and cheese. “As soon as I saw it wasn’t a clean sweep for Trump I ate everything in the house and then broke into my bug-out bag for some chocolate pudding. It wasn’t long before I busted into the bunker. I couldn’t help myself, this is all so stressful. Why are they counting all those fake ballots?!”

Friends of Hagan were reportedly upset about his actions, although not surprised.

“If Biden wins we are going to need that food! Those were supposed to last the entire militia most of the socialist apocalypse and now it’s gone in three days of watching Fox News,” friend and sovereign citizen Zach Ferguson said while reordering a new supply of dehydrated meat. “When Obama was elected, Lance locked himself in his bunker and almost overdosed on freeze-dried ice cream mixed with protein powder. We eventually had to use some of our dynamite to blow the door and rescue him, and I hate to see it happen again.”

Owner of the website PatriotEats, Doug Gordon, has seen this situation happen time and time again.

“I mean, sure we say it is for hurricanes or the apocalypse, but really our biggest customers are lonely, single men who don’t mind eating reconstituted chicken out of a plastic tub,” Gordon said. “They use fake names when reordering because they don’t want to admit they ran out of apocalypse food before the apocalypse but their cryptocurrency accounts are always the same. I don’t judge. Their money is putting my kid through paramilitary training. I’ve also been known to partake in a little salted horse meat when my wife is out of town. You only live once.”

As of press time, Hagan was rushed to the hospital after funneling a ten year supply of Spam.