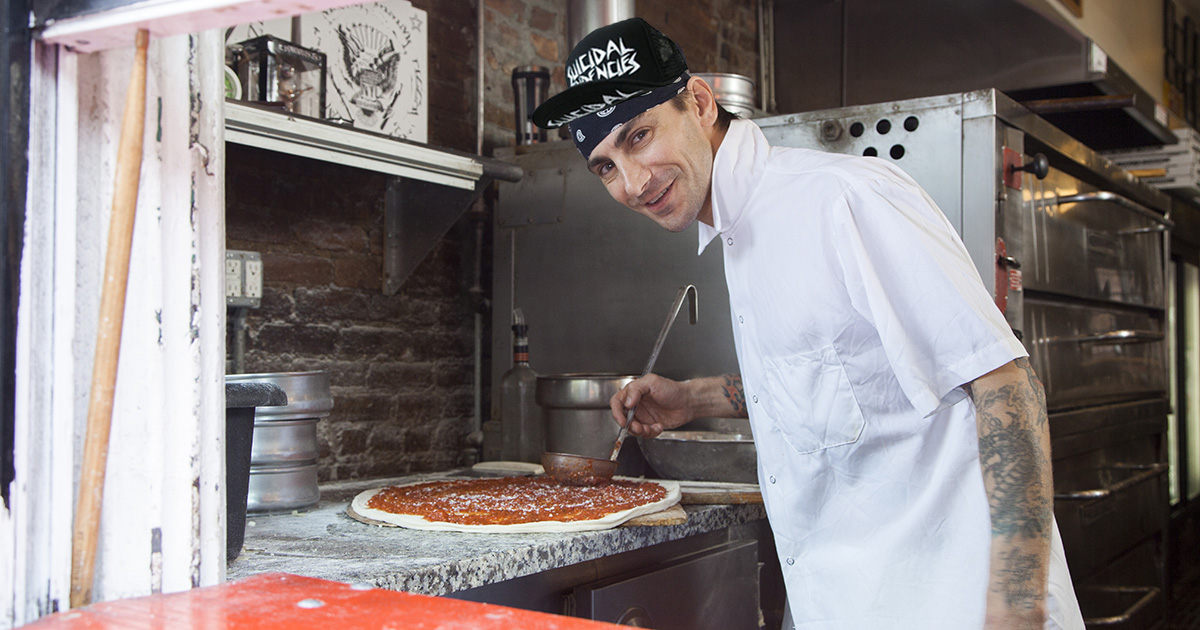 DENVER — Customers of local hotspot SlashCheese, a metal-themed pizza shop with a fittingly grungy exterior and blaring metal playing constantly, reported that the graphic designs on SlashCheese’s ever-evolving selection of stickers far outweigh the quality of their pizza.

“Everybody who comes in the shop comments on how dope our stickers are,” boasted SlashCheese owner Tanner Wilkins, a part-time drummer for the band Rodent Feast with no background in Italian cuisine. “My friend Daryl does the artwork. Goblins and warlocks eating pizza and shit. Like ‘Garbage Pail Kids’ meets ‘Magic The Gathering,’ that’s been our vision. Customers stop in weekly just to see if we have any new stickers out. It forces me to question why our Yelp reviews are so negative. One guy said, ‘The place has a great atmosphere, tons of vintage skateboards on the wall, the stickers are sick, but I’d rather suck my grandmother’s foot than eat that fuckin’ pizza again.’”

Repeat customers stop in weekly to stockpile a new assortment of SlashCheese stickers and typically try to leave before being forced to order a slice.

“The designs are fuego! I have Nalgenes covered in ‘em. Equipment cases. Some of their older stickers are just sitting around my apartment to patch holes in the wall,” said Harrison, a local stoner and aspiring noise musician. “I tend to avoid their pizza, which looks like someone crushed a rose-budding butthole with a shovel and then microwaved it. The sauce is like expired Prego mixed with afterbirth, and that’s on a good day. I’d be scared to try their vegan slice, I’d probably end up with dysentery. Great people, though, love SlashCheese.”

Foodies and critics, like traveling food blogger Missy Crystal, had harsher words to say about the pizza in question.

“Brick oven goat shit, with a hint of vomit,” served as her most concise, oddly specific summation. “I did enjoy the rough dynamic of their promotional material, but their pizza? It’s not Digiorno, it’s dick cheese on soup kitchen bread. It was like eating period blood on plastic wrap in one of Freddy Krueger’s revolting nightmare scenarios. SlashCheese is doing the stickers right though. I took a few of the stickers with a red-eyed pegasus sucking off a breadstick dick.”

At press time, rumors of SlashCheese adding calzones to their menu resulted in the Colorado National Guard being called in to prevent the establishment from ruining the cuisine forever.