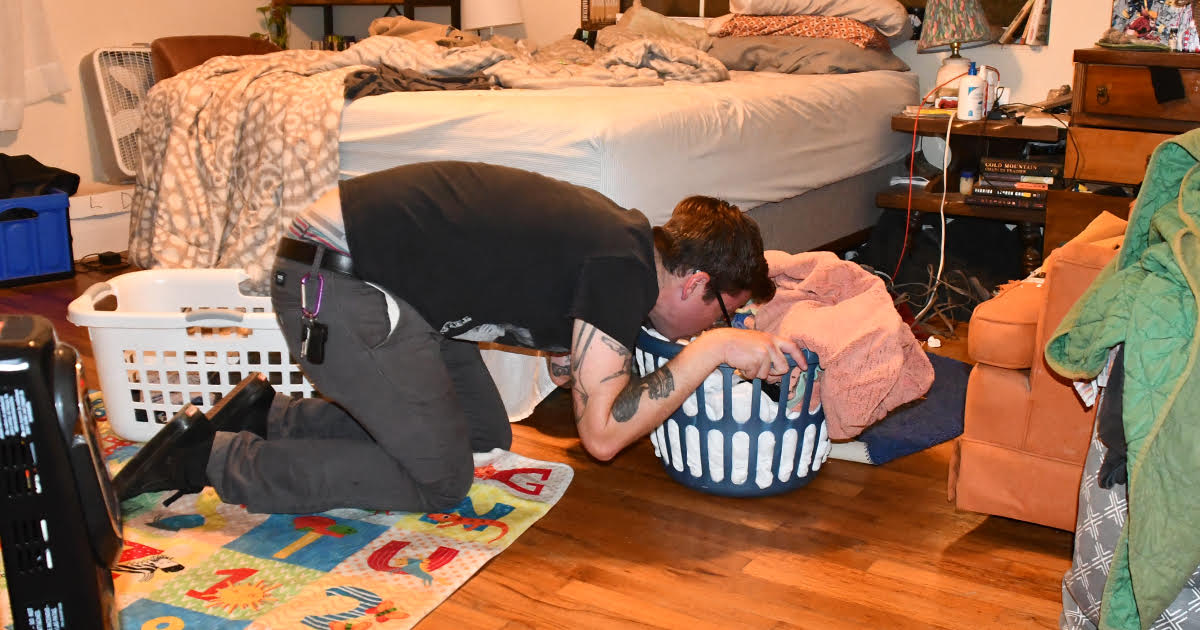 “Those clothes were still warm from the dryer — now they’re covered in macaroni, Jager, and what looks to be a bunch of small pieces of chewed-up cardboard. Fucking great!” exclaimed laundry owner Lis Dermainpsy while preparing for a second trip to the laundromat. “I don’t even know how he managed to get into my room in the first place. All the house doors were locked and I even have a deadbolt in my bedroom to prevent exactly this thing from happening. It took more skill and effort for [Plomchock] to fuck up my whole week than I’ve seen him put into anything else.”

Plomchock attempted to recount the series of events that led to the regurgitation.

“I was just, like, ‘who is it’ and, then there was a wood guy, he… uh, maybe it was a long stick… I tried to turn it, but no, too much high up. Shots!” slurred Plomchock with some vomit spittle still dripping from his chin. “Oh man. That was a whole so lot of stairs. Nothing making me go… but so clean. Thinking it was bathroom… make it pooped too.”

“I’ve been in this business for more than thirty years and I can’t tell you how many times I’ve seen some drunk asshole MacGyver their way somewhere secure, beyond all sense of reason or ability,” said Frieps who offers classes through her website on how to “Drunk Proof” a home. “It’s kind of disheartening in some ways. I apprenticed in this trade for so long to provide a service, but apparently all I need to do was slam a couple of forties before every shift and I’ll never let a customer down.”

At press time, Plomchock, who had so recently shown great acumen in overcoming locked areas, was struggling to pull the top off of a can of pineapple slices to eat.