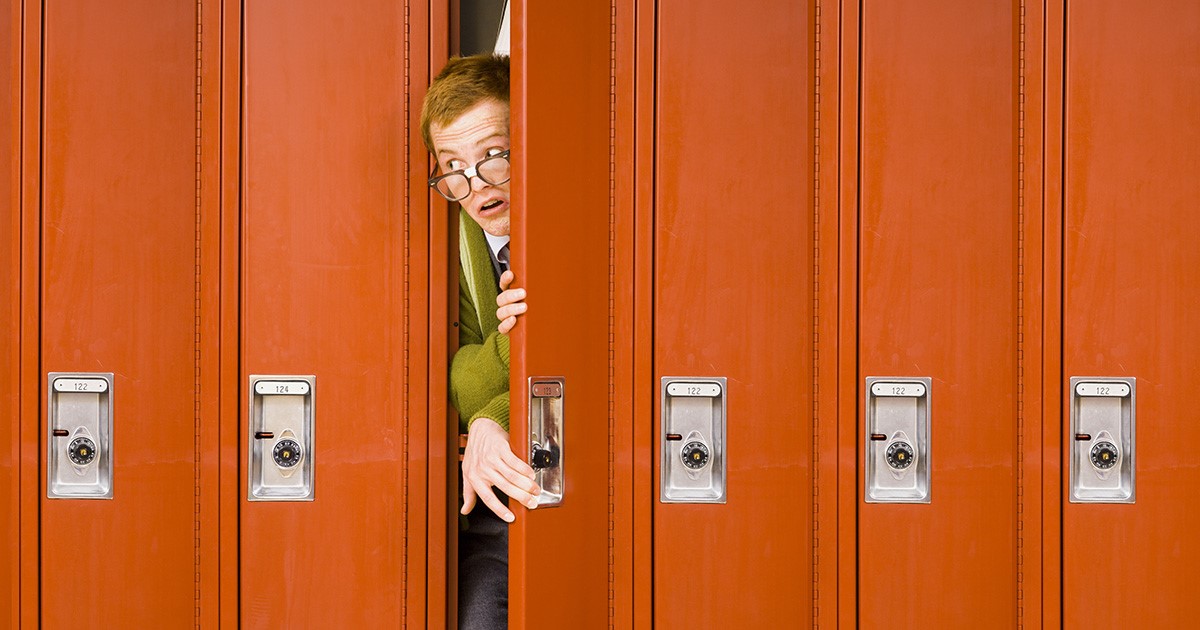 RENO, Nev. — Sweaty and bumbling 16-year-old Skyler Donovan attempted to hide in a locker today next to his crush Christina Selig while dodging bullets during yet another American school shooting, amused students reported.

“Dude, Skyler was running up and down the hall looking for Christina, looking like a total spazz,” recounted Friedman High School junior and Skyler’s best friend Vince Allridge, who was evacuated from the school by a SWAT team member. “I think he finally squeezed himself into a locker with her just as the gunman turned the corner. I bet Skyler is going to try to say they kissed. What a nerd.”

A 12-second video posted anonymously to social video app TikTok showed Donovan attempting to peer inside lockers while a bullet flew through his backpack, all to the tune of “See You At Your Funeral” by punk band PUP.

“It was pathetic,” admitted school security guard Walter Todd while being tended to by medics after a bullet ripped through his right bicep. “Skyler was running up and down the halls, yell-whispering that Mrs. Becker accidentally gave him Christina’s quiz back. That’s when I got hit and blacked out.”

First responders arrived on the scene mere minutes after the shooting broke out.

“Yep, it’s another shooting. Yadda yadda yadda,” offered deputy sheriff Miles McLandry of the Washoe County Sheriff’s Office while eating a donut. “You all know the drill. Honestly, this is one of the more generic shootings to happen in a while — I wouldn’t recommend clicking on a headline about this one unless you’re really bored. But we are monitoring Skyler Donovan and his attempts to strike up conversation with Christina Selig. We are all rooting for that guy to score a date to Homecoming… which will probably be funeral themed if this shit keeps happening.”

Second amendment supporters in the area offered their take on Donovan’s predicament.

“See, if it wasn’t for the genius of our forefathers to ensure our guaranteed freedom of firearm possession, Skyler would never have worked up the nerve to talk to Christina,” hypothesized neighbor Betty Costello. “I bet if he had a gun and shot the bad guy, that every girl in school would be looking to text him or whatever the hell it is kids do these days.”

Funeral services for Christina Selig will be held on Friday from 8 a.m to 1 p.m. at the Henry Funeral Home in Reno. Christina’s family has asked that in lieu of flowers, donations be made in her name to Everytown for Gun Safety.