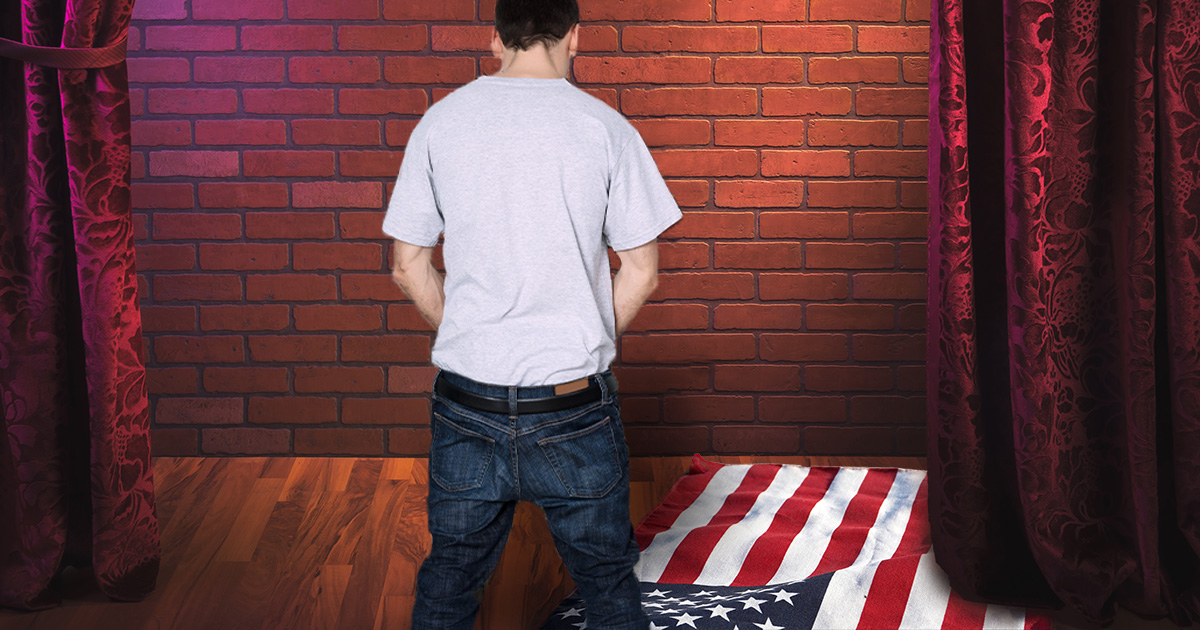 MADISON, Wis. — An audience at a local coffee house performance art event this past weekend was disappointed when the headliner, Indigo Starr, was unable to micturate on the American flag as advertised, venue staff confirmed.

“Look, I don’t want to seem unsympathetic here, but how about I get my fucking money back?” demanded “Red White & Piss” audience member Audrey Taylor. “I shelled out some serious cash to see a flag pissing, and what was I left with? A man in his late fifties coaxing the urine out of his bladder, to no avail, by lightly pouring water out of a bottle while grunting and cursing. Thanks but no thanks. I’m just going to cut my losses, buy a box of chardonnay, and curl up on my couch with some MSNBC.”

Starr was available for comment backstage following the closing number of the show, “United We Stand On The Flag Right Before Pissing On It.”

“Everybody’s upset that I didn’t soil the flag like I usually do. I get it. Back in the day, I could piss on demand, no problem,” acknowledged Starr. “But now I’ve got a prostate that’s swollen up to the size of a grapefruit, and I forgot to refill my Flomax prescription this week. So sue me! At least I didn’t take the easy way out and simply throw a lit match on the flag like some kind of fucking poser.”

Starr’s manager, Gordon Davies, was noticeably anxious at the prospect of losing out on ticket sales due to urine retention.

“Bloody hell, I love Indigo. Who doesn’t? But nobody wants to come to a show expecting a profound flag pissing and walk away with nothing more than a slight trickle at best,” noted Davies. “Long story short, we’re losing money. Fast. I’m considering hiring one of my nurse friends to catheterize Indigo before the shows, so he can just empty his piss bag on Old Glory at a moment’s notice if we want to stay relevant in the anti-imperialist live performance circles.”

At press time, witnesses noticed Starr sneaking bottles of apple juice through the coffee shop’s back door for the purpose of creating what they could only assume was a “piss-like” substitute.