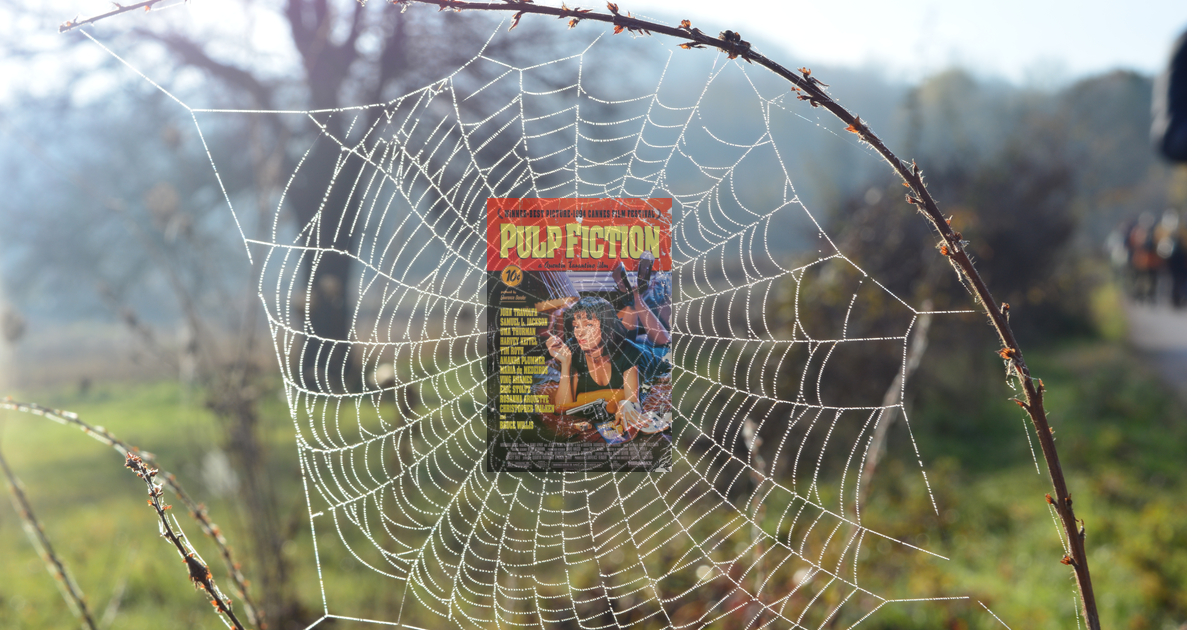 Dude, we got this new strain of weed from Maryland called “Bong Hit Transplant,” and it will melt your face. Anyway, me and my friends were in the circle passing the bowl around as usual, when Lauren saw this gnarly looking giant spider about to make a web. That’s when Rachel had the sick idea that we should not be hanging around near huge spiders, but then I had the even sicker idea that we should share some of this ganja with our eight-legged friend.

I blew my next cloud right in that spider’s face before forgetting all about it and going inside to fall asleep to a Revolutionary War documentary. But when I awoke, I was shocked to see that the spider had finished weaving her web, which was an exact replica of the “Pulp Fiction” poster I had on my wall.

This thing was unbelievable! It felt like John Travolta and Samuel L. Jackson were gonna leap out of the web and smoke my stoner ass. That spider knocked every detail out of the park, right down to the texture of Jules’s afro! This web made the “some pig” web from Charlotte’s Web look like a piece of dog shit! Why was that spider named after a weed strain, anyway?

I needed that thing in my room. The first thing I did was try to frame it, but that didn’t work. All I got were sticky hands and a pissed off spider glaring at me as if to say, “Woah man, not cool. That was like, my art, man.” And, ya know, I get that. It was uncool on my part. So I told the spider, “Oh. My bad, bro,” which is my go-to phrase when it comes to cooling down heated situations created by my stoned decision making. The spider seemed chill, so we were able to move past it.

Next, I got really fucking high and realized the best course of action was to move my room outside to where the spider’s web was. A few minutes later, I realized how silly that was. I’d need to be way higher if I were to move my entire room outside. So I did that. I was able to get my couch and TV out there but gave up once I realized there was no place to hang Scarface and Bob Marley.

I admit this was a low point for me. That’s when I got my best idea yet: get really fucking high again. Then it hit me. My room isn’t just my room. And my house isn’t just my house. This world is ours. It’s all of ours. It’s a part of us, and we are a part of it. By that logic, the spider web/”Pulp Fiction” poster is already in my room. This array of furniture and snacks I brought outside is not a mess I should clean up because it looks like it’s about to rain. It’s my home. It’s everyone’s home. It’s exactly what it needs to be, and that’s okay.

That’s when I fell asleep on the couch, and woke up soaking wet on a ruined couch in the middle of a thunderstorm. I abandoned the idea and decided to just get high and watch “Pulp Fiction.” Upon re-watching, it’s a fun flick, but the story is disjointed and all over the place. Whoever made this movie must not have been high enough.