Help: I Was Just a Big Guy Wearing a Black Shirt Standing in Front of the Entrance and Now I’m the Bouncer 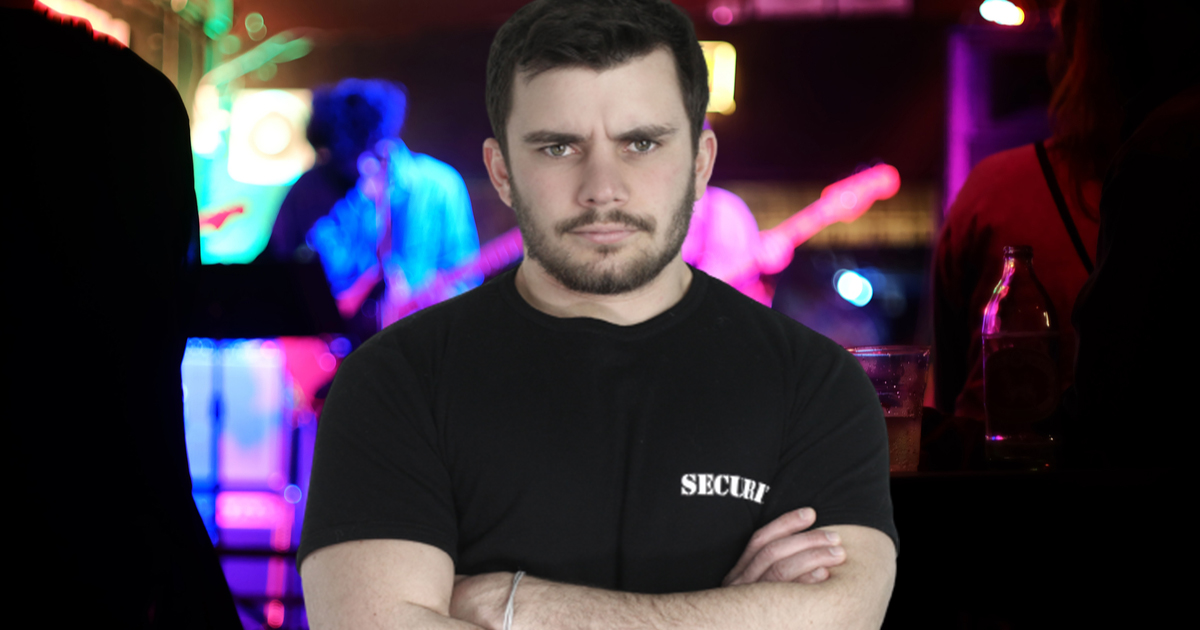 There I was, just waiting for a friend outside Dom’s Pub when a bunch of random people started shoving their IDs into my face. I didn’t even know what I was looking at before people started rolling their eyes at me. I mean, I don’t think I’ve checked my own driver’s license since I got it. That was at least six beard styles ago.

Just because I’m a 6’5” 300-pound dude who was standing by the door with his arms crossed, it’s OK to assume I’m the bouncer? Can’t a guy just wear a short sleeve Cannibal Corpse t-shirt with a bloody cadaver on it for a relaxing night out on the town?

It wasn’t just the customers pinning this role on me, either. Before I could answer my own existential questions, a bartender came outside and barked orders for me to kick someone out who stole two Jagerbombs. Where the hell were the real bouncers? While I was looking around for them, I made eye contact with the drunk idiot who needed to be ejected. When he noticed me, he choked out an apology and tripped over a barstool before commenting on my size and ducking out.

Then, just when I was about to tell the bartender I don’t actually work there, two bros started pushing each other and arguing about whose pants were more expensive. They looked like two middle schoolers, and I instinctively wanted to yell “Fight! Fight! Fight!” but what came out was “You two, outta here, now!”

The rowdy kids and some of their friends I wasn’t even talking to booked out of there fast. What the hell was happening to me? I looked down at my arms and found that they were bigger and more heavily tattooed than they’d been a moment ago.

None of this made any sense. I wasn’t the bouncer, I was… but then that was the damnedest thing. I couldn’t actually remember what I did for a living. In fact, I couldn’t remember any detail from my life before, even my own name, though I was aware of a strange impulse to answer to the name Butch.

The Cannibal Corpse logo began to vanish from my t-shirt “Back to the Future” style, replaced by the word “security.” A man in dark clothing roughly my size ran past me out the door shouting “I’m free! I’m free!” but that was none of my business. I had ID’s to check, and troublemakers to toss.

This is how it is, now. I am the bouncer. I have always been the bouncer. I only dreamt that I was a patron, someone with a family and friends who loved him. The sleeper has awoken.