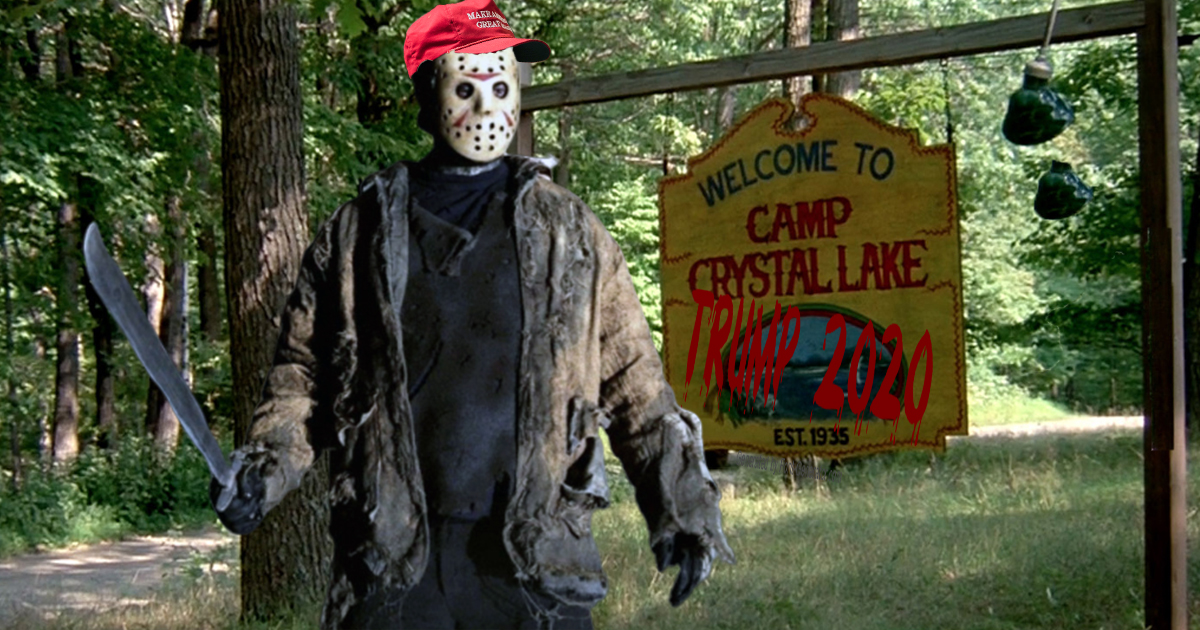 The Trump train keeps barreling towards 2020! Along with record job creation and the highest poll ratings in Presidential history we continue to get support from yet another of our country’s great success stories. In our continuing from America’s moral majority we are proud to announce an endorsement from legendary Sex After Marriage advocate Jason Vorhees.

In is home state of New Jersey Mr. Vorhees has dedicated his life, and then some, to his dire commitment to stopping premarital sex. Just like our great President Trump, Jason has not been afraid to take a fight head on and never been afraid to get his hands dirty. He has literally used every tool in his tool-shed to stop the youth of America from going down the dark road of premarital sex. President Trump could not be more ecstatic to have Mr. Vorhees on his MAGA team.

Beyond the premarital sex issue, Jason has long been a supporter of a wide spectrum of conservative values. He fully believes that a child belongs with his mother. Jason has been nothing but hand on showing that drug usage means certain death for all involved. Jason knows the value of a quiet rural life. And he also knows the value of being able to ruthlessly execute a trespasser on private family property. All ideals that this great country was built on.

Oh sure, the Libs like Tommy Jarvis are going to try to drag up Jason’s past. They will claim that he handled things too harshly. Ha! Hardly. I mean, where were those camp counselors while Jason was swimming in the lake? Are we just supposed to forget the abuse he endured? The Dems will also point out the endorsement was written in blood across the Camp Crystal Lake sign. Uh…excuse me, Mr. Vorhees is a mute. How else was he supposed to communicate to the world that he knows who the greatest president in history is? It’s just like a snowflake to make fun of a handicapped person. Once again proving we are the party of compassion.

So let’s all send all our thoughts and prayers to Jason Vorhees. Because with Donald Trump back in the White House we can have a nation of Jason’s finally able to be free to MAGA. God Bless America!